The Cold Light of Mourning by Elizabeth J. Duncan 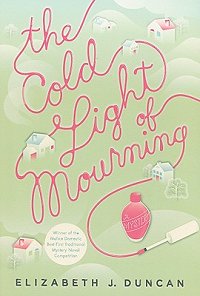 First Line: Emma Teasdale had been ill for some time and on a cool evening in early June, alone and peacefully, she died.

When visiting the market town of Llanelen in North Wales as a young student, Penny Brannigan was taken under schoolteacher Emma Teasdale's wing. They became fast friends, and Penny moved from Nova Scotia in Canada to Llanelen where she opened a small nail salon. As the years passed, the two women shared their lives with each other just as a mother and daughter might. Emma's death, although expected, has greatly shaken Penny, leaving her feeling at loose ends.

Perhaps that's why she takes such an interest in the disappearance of bride-to-be Meg Wynne Thompson. Self-made Meg Wynne was about to be married to the local landowner, and townspeople didn't like her much. But when the young woman vanishes on the morning of her wedding and Penny is the last person to see her alive, Penny feels that she should do everything she can to help the police solve the mystery.

Although the identity of the person responsible for Meg Wynne's disappearance was rather transparent to me, there was so much that I liked about this book that I didn't care.

Starting out with the stock characters of a typical small town, Duncan has added layers to them and created a wonderful cast. Penny's troubled youth in Canada has made her an adult who prefers to be in her own company, but she is a genuinely observant and caring person. Detective Chief Inspector Gareth Davies and Detective Sergeant Bethan Morgan are the sort of police officers you want to show up in your town to look for a missing person. Davies in particular quickly learns to appreciate Penny's eye for detail.

Penny isn't the typical amateur sleuth that she describes to friends:

"What, you mean like those dotty middle-aged amateur lady sleuths that you see in books? Tramping all over the evidence, touching things they shouldn't, putting themselves in harm's way, and just generally annoying the police?"

When she feels that she has something important that will help the police find Meg Wynne, she immediately calls them. It certainly is refreshing to have an amateur sleuth be level-headed and sensible, and it's fun to watch the inspector start to take a shine to her.

Although the villain of the piece was easily guessed, what wasn't easy was figuring out how it was all done. Between the characters and the crime details, this was a very enjoyable, light mystery, and I look forward to meeting Penny again.