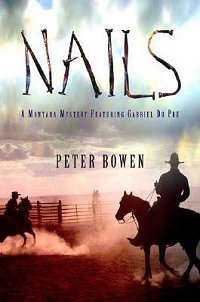 A family member has returned from Iraq missing a leg, an eye, and his grip on reality. His hellion of a granddaughter, Pallas, has returned from her studies in Washington, D.C., and a vanload of fundamentalist Christians has arrived in Toussaint, Montana. Du Pré is pretty sure he's going to have his hands full for a while.

Graffiti on the door of Father Van Den Heuvel's church and a panicked phone call from an unidentified girl cause people in the town of Toussaint to be worried, and when the nude body of a young girl is found by the side of the road, Du Pré and the others know it has something to do with the newly-arrived fundamentalists. The trick is in finding out how and why.

It is depressing when a much-loved series of books comes to an end, but in many ways, Nails is a fitting end to the story of Gabriel Du Pré and the people of Toussaint, Montana.

Throughout the series, Father Van Den Heuvel has been seen as a lovable but almost fatally clumsy man-- a figure of fun. In Nails, we are given a chance to see him fleshed out, and it becomes clear why the townspeople love him.

Gabriel Du Pré lives where he should-- in a land of fiercely independent people who take care of their own and who take responsibility for their own actions. He is the furthest thing from politically correct. He ignores the speed limit, smokes hand-rolled cigarettes, and drinks whisky like most people chug down bottled water. But he also plays fiddle like an angel, takes care of his friends, and defends the weak. These are his passions, and he serves them well.

Throughout the book are little stories that don't do much to advance the plot, but they make me smile and love these characters even more. These people are not rednecks. They are living the life they want to live and raising their families. Their children are scattered around the globe, serving in the military, working for oil companies, studying art.

A friend read one of these books. I had carefully told her about the non-PC elements because I didn't want her to have any rude shocks. When she was finished reading, she started to rant about child abuse and the myriad other things she found wrong. Well... she's thirty years younger than me. She's come to believe that parenting is in effect wrapping children in cotton batting so nothing can hurt them and giving them everything they want. When I read about Du Pré and Madelaine's methods, it feels familiar. I see lots of love, and I see people raising children to be responsible and to work for what they want. If this makes me an old fart, then that's what I am.

Nails is touched with sorrow, showing a small town that's dying around the edges. As a local schoolteacher says, "These days, if you don't have an education and often enough if you do, you work for nothing and you get nothing for a life of work." This book, more than all the others, shows how ignorance and fear beget violence.

Franklin Delano Roosevelt knew exactly what he was talking about when he said, "The only thing we have to fear is fear itself." Peter Bowen reminds us all that there are still people who do not fear to do what is right, and I cherish his portrait of them.