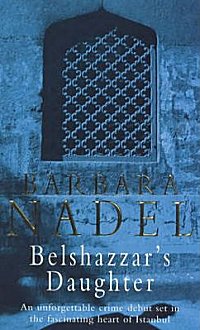 Çetin İkmen. There's not another policeman like him in the world. Traveling from case to police station to home with his endless supply of brandy and cigarettes, he's the father of eight (with the ninth shortly to appear) and the son of a man described as "an atheist, an anarchist, an intellectual snob and a libertine". Since his father also lives with İkmen and his family, it makes for a very interesting household.

İkmen and his young, handsome sergeant, Mehmet Suleyman, have been put in charge of the particularly gruesome murder of an old man in the ancient Jewish quarter of Istanbul. Since a huge swastika was drawn on the wall above the body in the victim's blood, lots of people show an interest in the case-- including the Israeli embassy. İkmen is under pressure to solve the case quickly to get everyone off his superior's back, but the wily inspector knows that everyone's favorite suspect, Englishman Robert Cornelius, isn't the right one. The way the man was killed speaks of a very personal motive, and İkmen won't rest until he puts all the clues and the evidence together.

İkmen is the most amazing policeman I've come across in all the police procedurals I've read. He does his best work loaded to the gills with brandy, nicotine and no sleep. He knows his superior is beneath contempt-- and doesn't hide it. The only thing that keeps him on the job is the fact that he's damned good at what he does.

Nadel wove a tale that left me reluctant to come up for air. She may be British, but she's been visiting Turkey for over twenty-five years, and she knows the country. The setting of Belshazzar's Daughter is a richly woven tapestry of history, culture, sights, smells, narrow ancient streets, honking car horns, and the babble of many voices.

She can make characters come to life within a single paragraph, and the cast she creates is absolutely wonderful. İkmen and his family take center stage, but even the single appearance of an elderly rabbi is so well drawn and touching that the old man will live on in my memory.

İkmen calls this the nastiest case he's ever worked on "because there was absolutely nothing to like about any of the people involved in it. For one reason or another they were all absolutely selfish." He's absolutely right. With its overtones of Nazi sympathizers, the purges following the Russian Revolution, and just plain insanity, there's not much to like about all the suspects in Belshazzar's Daughter.

I can't wait to get back to Turkey.