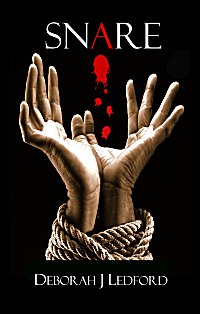 First Line: Katina's eyes locked on the straight-back chair she had wedged under the doorknob.

Katina Salvo has come a long way from her abusive childhood. The reclusive Native American singer/songwriter's music sells very well, even though she's never made a personal appearance or given a concert. Her manager feels that it's time to change all that and have Katina move another step up the ladder, so a concert is booked in a small North Carolina theater where Deputy Steven Hawk will be put in charge of the singer's security.

Something goes terribly wrong at the concert, and Katina and Hawk are attacked. No one is quite sure of the assailant's identity, so the singer and the deputy regroup in familiar territory for Katina: the Taos Pueblo Indian Reservation in New Mexico. Hawk is determined to find this mysterious attacker before he can get close enough to kill the talented young woman.

Snare was so good that I'm going to have to get my hands on a copy of Ledford's first book in the series, Staccato. The pacing kept the story moving at a fast clip, and the plot-- after giving readers two viable suspects-- kept me trying to guess the right one. (I guessed wrong, by the way.)

Ledford has created a compelling story where the main characters are all members of minorities. (I love it when the Lone Ranger doesn't show up and the day is saved anyway.) She's also very adept at adding small details that can pack a big emotional punch-- as when the very young Katina is hiding in her bedroom and marking time on her Hello Kitty alarm clock.

The scenes revolving around the concert-- both doublechecking the security set-up, the concert itself, and the near-riot and attack-- moved lightning quick, were frightening, and felt almost as though I were watching a video. Everything was crystal clear in my mind's eye. Also much appreciated were the details of Taos Pueblo life and culture during the scenes taking place in New Mexico.

All in all, I found Snare to be a very good read, and I'm hoping Deputy Hawk has a good long run of many books to come.