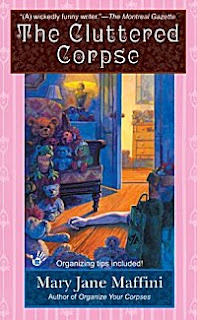 First Line: "You have saved my life."

When professional organizer Charlotte Adams steps into Emmy Lou Rheinbeck's home, the place looks fit to be featured in House Beautiful. Where's the mess that needs to be organized? When Emmy Lou shows Charlotte the second floor, Charlotte understands the reason for the call for help-- she's never seen so many stuffed animals in one place in her life.

Charlotte knows that she can handle this organizational problem, but she's not so sure Emmy Lou can handle her neighbors. Two young men are pulling cruel jokes on the woman until she's a nervous wreck. Emmy Lou insists that the pranksters are harmless, but before Charlotte can even put her plan to paper, she's up to her neck in a murder.

Two books in, and I like this series very much. One note of realism that I particularly appreciate is the fact that, after the first book, Charlotte makes it clear in The Cluttered Corpse that she lost a lot of business when the news media reported her involvement in a murder case. Most other series that feature an independent businessperson like Charlotte would have you think that business blithely goes on as usual, with nary a dip in clientele.

(As a side note, I have a thing for organization and places like The Container Store. I do hope in at least one future book, Charlotte gets to finish the project for which she was hired. I really enjoy that part of the books! I also pay attention to the organizing tips at the beginning of each chapter. My favorite in this book? "Don't bring anything new into your home unless you know you have a place to keep it. Except for books, of course.")

To get back on track... as I read, I first had the idea that Emmy Lou's neighborhood was flat-out weird and perhaps a little over-the-top until I remembered that, at one time, my own street housed six different nationalities, a 90 year age span from oldest to youngest-- and the house on the corner where young thieves would gather to plan their next rash of burglaries.

I deduced quite a bit of what was going on in The Cluttered Corpse, but as is the case with so many cozy mysteries, the whodunit isn't as important as the who. I enjoy hanging out with Charlotte and her crew, and Maffini's sense of humor can have me laughing out loud.

If you'd like to organize a fun and pleasant afternoon, I suggest you give Charlotte Adams a call.