The Distant Hours by Kate Morton 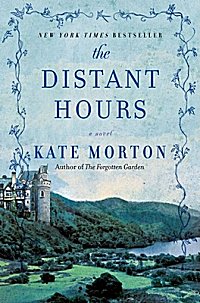 First Line: Hush... Can you hear him?

Three elderly sisters live in a crumbling castle in the south of England, closely guarding their secrets, until the chance delivery of a 50-year-old letter to the mother of London book editor, Edie Burchill.

As a teenager, Edie's mother was evacuated to Milderhurst Castle during the Blitz and lived with author Raymond Blythe and his three daughters, twins Persephone and Seraphina, and Juniper. When Edie has an opportunity to read her mother's letter and to learn that her mother actually lived with the author of her favorite children's book, The True History of the Mud Man, she naturally wants to learn all she can about her mother's time there, the castle, and the Blythes. The thick, sticky spiderweb of secrets she blunders into has been in place for decades, and as they are exposed to the light of day, there will be repercussions for them all.

I loved Morton's first two books, The House at Riverton and The Forgotten Garden. The author's descriptive, atmospheric writing swept me away into these stories for long periods of time, and when I came up for air, I had to blink a few times to bring the world into focus. Not so with The Distant Hours.

With the exception of The True History of the Mud Man-- a children's book written by one of the characters-- which is truly creepy and stirred the hair on the back of my neck, I was never transported by the story. The book felt too much like the gothic romances by Dorothy Eden and Victoria Holt I read as a teenager.

Although Morton's characterizations are as excellent as they were in her first two books, once the cast of characters was in place, it was relatively easy for me to decipher all the secrets and know what happened at Milderhurst Castle. And... since I wasn't transported by the story, the book felt bloated and very slow-moving.

Has this put me off Kate Morton's writing? No. Besides, I really wouldn't call this a "bad" book, merely an average one. I enjoyed her first two books so much that I'll still be watching for the next.