The Pure in Heart by Susan Hill 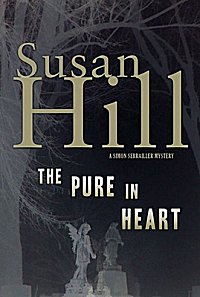 First Line: At first light the mist was soft and smoky over the lagoon and it was cold enough for Simon Serrailler to be glad of his heavy donkey jacket.

Still brooding over the death of a fellow officer the previous year, Detective Chief Inspector Simon Serrailler is on holiday in his beloved Venice, Italy, to bury himself in his art. Instead, he receives a phone call from his father telling him that if he wants to see his younger sister alive, he'd best get on a plane now.

Simon does, but the scare turns out to be a false alarm. He briefly considers going back to Venice, but then nine-year-old David Angus disappears while waiting for his ride to school, and Serrailler knows he must stay.

There are several subplots going in The Pure in Heart: the young boy's abduction, Simon being stalked by an ex-girlfriend, a young man just released from prison who finds out how hard it is to stay on the straight and narrow, the deteriorating health of Simon's sister... but they are all skillfully interwoven and Hill kept me turning the pages with her fluid, visual writing style and the depth of her characterizations.

Hill has a marvelous gift for making characters and situations come alive. I felt ex-con Andy Gunton's frustration at trying to find a decent job that he actually liked and his intense dislike of being forced to stay with his grudging sister. I felt how the members of Simon's family were being pulled apart by the health of the youngest sibling and the age-old question of how a severely handicapped person can have quality of life.

The subplot that had the tightest hold on me as a reader was that of the abducted boy, David Angus. Hill shows in agonizing detail how a good marriage can be pulled apart at the seams by such an overwhelming tragedy. Hill kept my focus on the boy by interspersing short chapters that were David trying to talk with his abductor. Those chapters put me in that little boy's shoes, and they were also a lifeline: as long as those little italicized chapters appeared, I knew David was still alive. That was a brilliant device to make the reader every bit as emotionally involved as all the characters in the book who were so desperately searching.

Is it necessary to read The Various Haunts of Men before picking up The Pure in Heart? No. Hill provides enough backstory to keep the reader from being confused but not so much that it bogs down the pacing of the story.

It may not be necessary to read the first book in the series before you read the second, but one thing should be necessary: that all of you who love beautifully written and plotted mysteries filled with characters who live and breathe on the page should get to know Simon Serrailler.


Buy from Amazon.
Buy from The Book Depository.
Buy from an Indie Bookseller.
by Cathy at Friday, March 04, 2011