Manna From Hades by Carola Dunn 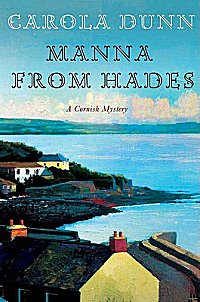 The 1960s find Mrs. Eleanor Trewynn living in the small fishing village of Port Mabyn in Cornwall, England, where she's retired and living above the LonStar charity shop that she founded. She and her husband, Peter, spent many years doing charitable works in third world countries, but after Peter's tragic death, Eleanor and her West Highland Terrier, Teazle, travel the back roads and tracks gathering donated goods for the shop.

One day when Eleanor and the vicar's wife go to the stockroom to sort and price the donations, they find the body of a scruffy-looking young man hidden under bags of clothing. Eleanor's niece, Detective Sergeant Megan Pencarrow, arrives as part of the investigating team, and the Detective Inspector in charge is a big, gruff man who has no use for women in the police force.

The setting for this book is perfect, with a picturesque village and the sea on one side, and the wandering narrow back roads of the countryside on the other. The secondary cast of characters is well drawn and memorable. The murder and the way it ties in to a donated case of jewelry is interesting, but I found the execution of some of the parts a bit uneven.

Eleanor Trewynn, the main character, is in some ways an endearing creature who knows the truly important things in life are people, their relationships to one another, and their well being, but she can be absolutely exasperating. Her keys need a 24-hour armed guard because Eleanor never knows where they are. The constant fumbling about for keys got old after the first dozen times they went missing-- as did her continued reluctance to tell the Detective Inspector important information in a timely manner. No wonder the man wanted to strangle her!

Also, her charitable work in third world countries was only obliquely referred to. If there had been more backstory, or a flashback or two that had fleshed out this period of Eleanor's life, I think it would have gone a long way to dampen my exasperation with her character.

Although Manna From Hades does have a problem or two, it does show promise as the start of a new series. I hope the second book is a stronger entry.


Buy from Amazon.
Buy from The Book Depository.
Buy from an Indie Bookseller.
by Cathy at Thursday, March 24, 2011