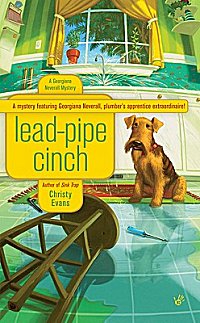 First Line: "Let's get a move on, Neverall," Sean Jacobs, the crew foreman, said as he gestured toward the muddy bottom of the trench.

As this second book of the series opens, apprentice plumber Georgiana Neverall finds herself building a moat-- part of a state-of-the-art castle for a retired Microsoft engineer. Almost before she can blink an eye, her ex-boyfriend has shown up to take care of the security system for the property. Since this is the same ex-boyfriend who sold her company out from under her, his body being discovered at the bottom of the moat doesn't bode well for Georgiana. When the law seems to be eyeballing her a lot-- and moving very slowly at the same time-- what's an apprentice plumber to do but set out to prove her own innocence?

Just as important as the whodunit in this book are the evolving relationships between Georgiana and her family and friends. Her mother's boyfriend is acting strangely, and Georgiana has to decide if she should tell her mother what she knows.

In addition, this murder has opened a whole can of worms. When Georgiana was sold down the river, she left San Francisco vowing never to look back and to make a completely new and different life for herself. She is making a lot of progress on that new life, but at the cost of a lot of secrecy. Another decision facing her: does she want to continue to keep her friends in the dark to salve her pride, or does she want to place her trust in them?

As ever, the mystery and the plumbing tips are first-rate, but what really makes this series shine is its main character and the small select group of people she is gathering around her.

The third in the series, Drip Dead, has just been published, and I look forward to reading it. Do these books stand alone well? Yes, they do, but (as always) in the case of a series that depends so much upon characterization, I recommend that you read the series in order.


Buy from Amazon.
Buy from The Book Depository.
Buy from an Indie Bookseller.
by Cathy at Tuesday, March 01, 2011