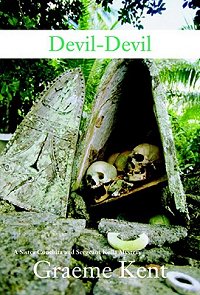 First Line: Sister Conchita clung to the sides of the small dugout canoe as the waves pounded over the frail vessel, soaking its two occupants.

It is 1960 in the Solomon Islands, which saw some of the fiercest fighting during World War II (Guadalcanal among other battles). Memories of those days are still vivid. Sergeant Ben Kella of the Solomon Islands Police Force knows those days quite well, but he has many other things on his mind. Educated by the whites and now a member of their police force, Kella is still the aofia (spiritual peacekeeper) of the Lau people. His dual roles mean that neither the British colonial government nor the native peoples trust him 100%.

New to the islands is Sister Conchita, a young Catholic nun from Chicago who chose her name because she thought she was being posted to South America and wanted to fit in. She wants to learn native customs and to help these people as much as she possibly can. Her vows of poverty and chastity won't be problems for her, but her vow of obedience may be a backbreaker. Her impetuous desire for doing the right thing means bent and broken rules everywhere she goes:

In any case, it had always been her philosophy that it was better to apologize profusely after the event than to neglect an opportunity when it arose.

Sergeant Kella has been busy. Within a matter of a few days, he's been cursed by a shaman, stumbled across evidence of an uprising, and been unable to find a missing American anthropologist. When he stops at one of the mission stations, he finds Sister Conchita trying to bury a skeleton on the sly. Little does he know that he'll soon be teaming up with Sister Conchita to solve a series of murders that tie in with all these strange happenings.

Plain and simple-- I loved this book. Author Graeme Kent was a Schools Broadcasting Officer in the Solomon Islands during the 1960s, and he immersed me in the culture of the place without being heavy-handed or pedantic. He also painted a vivid portrait of the Solomons during World War II with a very few strokes... just enough to fire the imagination and illuminate portions of the plot.

The two main characters, Sergeant Ben Kella and Sister Conchita, are two of the most interesting characters that I've come across recently in crime fiction. With their differences in culture and temperament and their similar penchant for doing what they think right regardless of the prattling of their superiors, they are going to make a wonderful crime-fighting team. (They're pretty good at cracking jokes, too.)

I can't wait for more books to appear in this series!