The Winter Ghosts by Kate Mosse 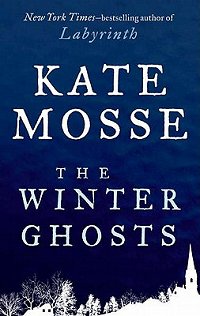 First Line: He walked like a man recently returned to the world.

It is 1928, and Freddie is still mourning the death of his older brother in World War I. Traveling as a way to both learn and escape, he finds himself high in the French Pyrenees. He loses control of his car in a snowstorm and is forced to walk through the woods until he finds a small village where he can take refuge until his car is repaired.

Invited to a village celebration, Freddie meets the beautiful and ethereal Fabrissa who is also mourning the loss of loved ones. During the course of the night, Freddie and Fabrissa share their stories, and when dawn breaks, Freddie not only uncovers an ancient mystery, he also discovers his own role in the life of this remote village.

Having previously read Mosse's other two novels, Labyrinth and Sepulchre, I expected an engrossing tale densely layered with the atmosphere and history of the French Pyrenees. I was not disappointed. Almost from the moment Freddie stepped foot in the quiet, tiny village, the hairs on the back of my neck began to prickle. He was a young man so in need of being rescued-- and of being the rescuer-- that I couldn't help but keep my fingers crossed as he navigated the streets of an ancient place where nothing was really as it seemed to be.

The only quibble I have with this book is that, at one third the size of her previous two novels, I felt a bit cheated. The marvelous atmosphere had time to build only so far before the tale was finished, and my unease allowed to melt away like wisps of fog. If the book hadn't felt so rushed, I would now be waving it around in the air exclaiming, "You've gotta read this!"


Buy from Amazon.
Buy from The Book Depository.
Buy from an Indie Bookseller.
by Cathy at Thursday, February 03, 2011