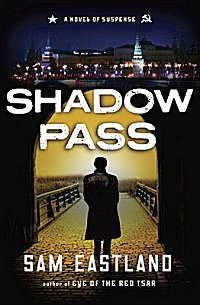 First Line: As the motorcycle crested the hill, sunlight winked off the goggles of the rider.

Deep in the Russian countryside, rogue genius Colonel Rolan Nagorski is working on a 30-ton killing machine in an atmosphere of absolute secrecy. Stalin has been watching Hitler closely, and he is depending upon Nagorski to perfect and deliver this deadly weapon. When Nagorski's body is found next to his invention, the T-34, only the most innocent believe that his death was an accident.

Once Tsar Nicholas II's most trusted investigator, Inspector Pekkala is summoned by Stalin to find out who murdered Nagorski... and who is responsible for putting his battle plans in jeopardy.

Shadow Pass (published in other countries as The Red Coffin) is an excellent follow-up to Eye of the Red Tsar. It's difficult to fathom how one man could possibly be the Tsar's right-hand man, spend several years in a gulag in Siberia, and then become the man Stalin sends out on his toughest assignments, but Pekkala is known to search for one thing only-- the Truth-- wherever it may lead him.  Eastland's research into both Tsarist and Stalinist Russia is excellent and adds immeasurably to the story.

Another bonus in this second book is that Pekkala's backstory is fleshed out more, making the "mystery man" and his actions more understandable.

Do you need to read the first book in the series in order to understand the second? Not really, but both are excellent, fast-paced books with no extra filler. There's no need to deprive yourself of what's rapidly turning into an excellent historical mystery series.


Buy from Amazon.
Buy from The Book Depository.
Buy from an Indie Bookseller.
by Cathy at Tuesday, February 22, 2011