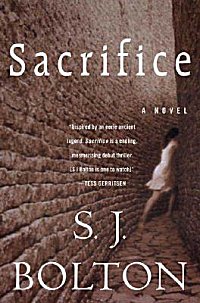 First Line: The corpse I could cope with. It was the context that threw me.

Obstetrician Tora Hamilton is a newcomer to the Shetland Islands, although for her husband it's merely a matter of returning to the place where he grew up. While digging a large hole in the peat on their property, Tora unearths a human body.

At first thought to be centuries-old, the body is actually much newer. The female victim's heart was cut out, and she'd given birth a few days before she was killed. Tora becomes obsessed with finding out what happened to the dead woman, no matter how many people tell her not to get involved. What she uncovers almost defies belief.

Used to the islands of Ann Cleeves' Shetland Island Quartet, I expected puffins on the windowsills and the incredible natural beauty:

My favourite place to ride on Shetland was a half-moon beach, where dusky-pink, grass-tufted cliffs rose like the sides of a pudding basin around a bay of deepest turquoise. As I thundered along, spray blurred my vision and all I could see was colour: emerald grass, turquoise sea, pink sand and the soft, robin's-egg blue of the distant ocean. There are times on the islands when flowers seem superfluous.


In that I was not disappointed. I also wasn't disappointed in the character of Tora Hamilton. Although she admits that she relies too much upon the reassurance of others, when faced with a victim whose death doesn't seem right, Tora is quite prepared to throw all caution to the wind in an attempt to discover what really happened. She's also a person who is not transportationly challenged. She drives a car, is willing to walk, is an excellent equestrian, and a very good sailor. All she needs is a pilot's license so she can fly away from (or into) danger.

The plot moves at a very deliberate pace, setting itself up for the denouement, and although it is a bit over the top, it is gripping all the same and creates a wonderfully creepy atmosphere. A strong and unusual female protagonist, a beautiful setting filled with history, good use of forensics, and a spine-chilling gothic plot-- Sacrifice grabbed this reader by the throat and wouldn't let go.