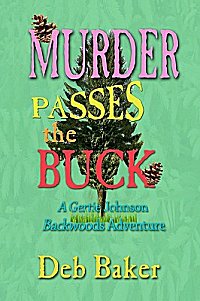 First Line: If my grandson Little Donny hadn't taken so long getting out of bed this morning, I would have been at Chester's hunting blind in time to see them haul Chester out.

It's been a little over a year since Gertie Johnson's husband died, and she's finally perking up a bit. She's sixty-six and is level-headed enough about her age to know she's going to let the gray hair and wrinkles slide while she focuses on life's more important matters. Listening to her police scanner is making her feel connected to the world again, and when Chester Lampi's body is discovered in his deer blind, Gertie decides to investigate:

The thought of investigating Chester's death appealed to me. The more time I spent listening to my police scanner, the more I thought I'd make a pretty good investigator. After all, I had three kids to practice on while they were growing up. If nothing came of my efforts and it was a stray bullet that killed Chester like Blaze and Cora Mae thought, I'd chalk it up to on-the-job training.

Of course it doesn't help that the local sheriff (who's got nothing but retirement on his mind) has declared Chester's death an accident and a no-investigate zone... and it also doesn't help that he's Gertie's son. That's not about to stop Gertie, and soon she's on the case with the help of her friends-- man-hungry Cora Mae and bodyguard Kitty.

Everything becomes further complicated when Gertie learns that that self-same son has petitioned the court to become her legal guardian, but she and her two cohorts continue to investigate-- even when the killer starts to target them.

A previous reviewer of Murder Passes the Buck said, "Fans of Janet Evanovich, imagine Grandma Mazur with a shotgun." I wouldn't go that far. Yes, Gertie has a shotgun, but she's not as cuckoo as Grandma Mazur. I'd go hunting with Gertie; she knows not to point a gun at anyone unless she fully intends to shoot them. Where Grandma Mazur is concerned, I wouldn't be on the same block as her when she's packin' simply because I trust her to do something stupid, and I can't drop flat to the ground as quickly as I used to.

Deb Baker makes it clear that the Upper Peninsula of Michigan is another place in America where bonafide characters live and prosper. Gertie is an original and a bit eccentric, but far from being a danger to herself or to others. It was a mark of how much I'd come to care for the old girl when I learned that her son was wanting to become her legal guardian. I wanted to aim one of my boots at him and kick him to the next planet!

If you're in the mood to read about some eccentric folks doing their thing in the backwoods, by all means become acquainted with Gertie Johnson and her friends. I know I'll be reading her next adventure very soon!


Buy from Amazon.
Buy from The Book Depository.
Buy from an Indie Bookseller.
by Cathy at Thursday, February 24, 2011