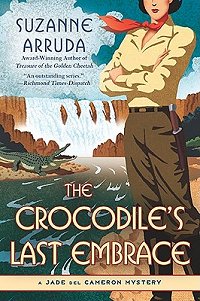 
Returning from a rather ill-advised trip to Europe where all destinations did nothing but dredge up painful memories, Jade del Cameron greets the sight of Kenya with two certainties: Africa is her home, and Sam Featherstone is the man she wants to spend her life with. When a letter arrives, Jade hopes it's from Sam, telling her the date of his return. Instead, she finds a message written in the hand of her long-dead fiance, asking "Why did you let me die?"

After witnessing a car going off a bridge and having more deaths follow, Jade begins an investigation that she believes is tied in with a fraudulent gold mine scheme, but when she learns that her old nemesis, Lilith Worthy has escaped from an English prison, Jade knows the case has just turned every bit as deadly as that huge, hungry crocodile that's been hanging around the foot of Fourteen Falls.

Although this Biscuit fan thought the cheetah was cheated out of his share of the spotlight in this book, I really did enjoy The Crocodile's Last Embrace. Arruda continues to draw more and more news and information of the period and the surrounding colonies into the books to give the reader an excellent sense of what life was like in Africa in the early twentieth century. For instance, this time we learned what Leopold, King of the Belgians, had his minions doing in the Congo.

These books just about have it all for me-- probably because I fell in love with and watched "Out of Africa" at least once per week while it was in the theatres here in Phoenix. To have an ongoing series of books dealing with roughly the same time frame, the same land, the wildlife, the early days of aviation and photojournalism is a delight.

The delight does not end with the aforementioned list. Arruda has a cast of characters that continues to adapt and grow with each new experience. Of course the major changes belong to Sam and Jade as these two fiercely independent people have to figure out if they can truly be together, but they aren't the only two who've changed through the passage of books. Just ask Jelani, the young Kikuyu boy befriended by Jade.

Speaking of younger characters, the young band of Girl Guides that Lady Dunbury is trying to gather under her wing? They're a hoot. Whenever those youngsters appeared, they made me laugh. I certainly hope they'll make another appearance in Jade's next adventure. I'll be looking for them (and Biscuit)!

The one thing most readers want to know about a book in a series is can they pick it up, read it, and not get confused if they haven't read any of the other books? In the case of The Crocodile's Last Embrace, readers should not have a problem, since Arruda included enough information from previous books to fill in the gaps.


Buy from Amazon.
Buy from the Book Depository.
Buy from an Indie Bookseller.
by Cathy at Thursday, February 10, 2011