Scene of the Crime with Leighton Gage

Sometimes trusting in serendipity is all one needs to do. Last year I proclaimed Leighton Gage's Chief Inspector Mario Silva mystery series, my "Series of the Year"-- and who should show up for a Valentine's Day interview than Mr. Gage himself! I'm not allowing myself to wax poetic this week, but if you're in the mood for a tough, gritty police procedural that will place you right in the middle of some of the meanest streets of Brazil, I'd love to introduce you to the books of Leighton Gage! (It's safe to spit out some of that grit because there's some marvelous humor in the books, too.)

Let's see just what he did with all those interview questions, shall we?

Pretzel, by Margret and H. A. Rey. The story, one of triumph over adversity, and the persistence of true love, begins (and ends) with the immortal line, “One morning in May, five little dachshunds were born”.

I must have been four when my mother read me Pretzel for the first time. I loved the story. I was enchanted by the illustrations. I found the moral inspiring and the ending uplifting. I wanted to hear it over and over again - and when I got old enough, I read it repeatedly to myself.

I’m sure many thousands of kids of my generation did.

And equally sure that many grew up to have dachshunds named Pretzel and Greta.

It wasn’t until years later that I discovered that the authors and I had something in common: they fell in love, and married, in Brazil.
Their life story, like Pretzel’s, is also one of triumph over adversity and the persistence of true love. Read about them here.
Pretzel is still in print after almost seventy years. It’s even available as an e-book. I re-discovered it in a bookstore a few years back, and bought it for my grandchildren.

And I fully expect they’ll remember it long after they’ve forgotten everything I’ve written.

Check out some of the illustrations with Amazon’s “Look Inside” feature.

Umm. . .well, to be honest, my advice about visiting my home town is: Don’t.

Rio de Janeiro is less than five hundred kilometers away. Go there instead.

If there was a beauty contest for the cities of the world, Paris would probably win in the architecture category.

And Rio would undoubtedly get first prize when it comes to physical location.

But São Paulo, I assure you, wouldn’t be among the finalists in either category. If you’re not doing business in Brazil, there is absolutely no reason to ever come here.

We have some of the finest restaurants to be found anywhere, that’s true, but you, Dear Reader, are probably not French and therefore unlikely to undertake a journey all the way here just to eat. You don’t think the French do that? Actually, they do. Go here and check out the significance of three stars in a Michelin Guide.

Meryl Streep. I’d be so honored if she’d accept.

My life? A movie? C’mon, Cathy. I thought this was supposed to be a serious interview.

[Me? Serious? Perish the thought!]

(If your reaction to the above was, “Who’s Arnaldo Nunes?” it’s because you haven’t read my books.)

Here’s the thing about authors: whether we admit it or not, we always have a preference for our own characters. It’s only natural. After all, we give birth to them, so in a sense they’re like our children. And don’t you prefer your children to other people’s children?

Before your very first published mystery, what else had you written (short stories, articles, unpublished manuscripts)?

My first book was O Filme Publicitário, a manual that taught people how to make television commercials. It was chock-full of information about camera angles, continuity, editing and that kind of stuff.

The book, never translated into English, became very popular with both cinema buffs and film professionals throughout the Portuguese-speaking world. In Brazil and Portugal, I’m still better known for O Filme Publicitário than I am for my Chief Inspector Mario Silva series.

My first work of fiction, a crime novel many times revised, was my “learning book”, Amazon Snow. (The snow in question being cocaine.)

A number of discerning publishers saved me from shooting myself in the foot by making sure it never got into print. In the light of retrospect, I am grateful to them. Remember this: nobody is capable of judging their own work. That’s why we need editors.

What did I do the first time I saw one of my books on a shelf in a bookstore? I ran right over and signed the darned thing.

In the wrong place. (Did you there is a specific place where an author is expected to sign? I didn’t. But I do now.)

As to the celebration, it was this way: THE CALL (the one no author ever forgets) came just before eleven on a rainy day in late December. I’d been commissioned to buy a case of champagne for a New Year’s Eve party. It was sitting in the pantry. When I hung up with my agent, my wife and I decided to pop a bottle of it to celebrate. Just one.

And then another. And then it was time for lunch.

I don’t remember much after that. I do remember I had to go out the following day and buy more champagne for the party.

And it cost me almost as much as the advance I got for the book.

Shows you how little a first-time author can expect to get in advance money, doesn’t it?

I think everybody in the business has seen that wonderful video of Parnell’s.
If you’re one of the few who hasn’t, indulge yourself.

Parnell’s refrain is “I’m signing in the Waldenbooks – and nobody’s there.”
Well, what did he expect, huh? I mean, it’s not like he’s Snooki Polizzi, or somebody important like that, is he? 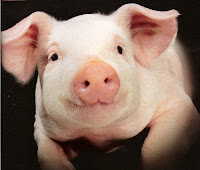 We’ve all had experiences like Parnell’s. But you know what? There are worse things than having no one show up. Like that time when a single, solitary attendee engaged me in conversation while my beloved wife was over in a corner of the shop, talking with the owner about pigs.

Anyone who has done signings in the American Southwest will know the bookstore. The owner raises pigs – and often touts their virtues as pets.

My wife loves animals. When we left that night, she’d been converted. She wanted a pig. No, actually she wanted two pigs, so the first pig wouldn’t be lonely. And she wanted to raise them in the house. (“Because pigs get a bad rap. They’re really very clean animals. Look at this picture she gave me.” – Wife shows photo of what must have been a 200 pound porker given to her by the owner of the shop. – “Isn’t he cute?”)

It took me two weeks to talk her out of it.

[Trust me. It's not easy to get one of those cuties out of a swimming pool once it's fallen in either.]

It’s not how they will affect me. They already have affected me. And it’s a lot.
I speak a number of languages, but I prefer to do my reading in English. And I live in a country without English-language libraries and English-language bookstores. For years, I used to lug suitcases full of books home with me from my travels. No more. In that alone, e-books have been a godsend.

And, as a writer, gosh, do I love them! They’ve enabled me to gain a whole new audience, a truly worldwide one.

Here’s how: I retain most of my rights outside of North America. That makes it possible for me to put my work up in many, many places without going through a publisher. Amazon lets me pick and choose between more than 260 countries and allows me to set my own price. At just US$ 2.99, and with Amazon’s generous royalties, the Kindle books I sell in the UK earn me almost as much as the hard covers I sell in the US.

And talk about easy! All an author has to do is to commission folks to format the file and design a cover that doesn’t interfere with existing copyrights.

Here, for example, is the cover you’ll see if you look up Buried Strangers, on Kindle, in Australia or New Zealand:

It’s very different from the one you’ll see in the US – and, personally, I like it better.

Then, too, there’s the opportunity to publish what I’m going to call “interim editions”.

My North American publisher limits me to one Chief Inspector Mario Silva investigation a year. On the left is the book I launched two months ago, in December of 2010. Lots of folks have read it already. But my dedicated fans are now going to have to wait until December of 2011, to read the one on the right.

Can I put it up on Kindle (in North America) before December?

In the United States and Canada, my North America publisher determines the launch date of all the books I contract with them. But I have another book, as yet uncontracted, that I expect to complete by July.

Could I put that one up?
Yes, I could.

I can’t write two books a year and make them good. But I’m perfectly capable of writing three good books every two years. So why not launch “extra” books as e-books in “interim editions”?

The book is called Perfect Hatred. No cover yet, but look for it on Kindle in July.

Or maybe not. The jury is still out.

[My husband does all his reading by audio book or by Nook. I've suggested Mario Silva to him several times because I know he'd love reading your books, but he can't find them available in either format.
On the other hand, I'm a dedicated physical book reader. The person who finally makes me take the eBook plunge? Arnaldo Nunes!]

Leighton, thank you so much for this wonderful interview. I really appreciate the time you've spent with my readers and me!

Mark your calendars for next Monday when another crime fiction writer will be interviewed on Scene of the Crime!