The True Memoirs of Little K by Adrienne Sharp 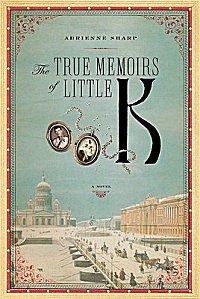 First Line: My name is Mathilde Kschessinska, and I was the greatest Russian ballerina on the imperial stages.

In 1971, a tiny, 100-year-old woman sits down to write her memoirs of everything she knows to be true. She is Mathilde Kschessinska, once the greatest ballerina on the Russian imperial stage. Born to Polish parents, when the extremely competitive Kschessinska was enrolled in ballet school, she set high goals for herself. She became the best ballerina; she became the lover of tsarevich Nicholas Romanov; she became wealthy beyond her dreams. In the end, she lost everything but her memories.

I had a difficult time reading this book for two reasons. The first is a technicality: not everyone can sit down and read undisturbed for a lengthy period of time. I've learned to look for paragraph breaks as natural stopping points. This book is 384 pages of very, very long paragraphs, and I was surprised to find that one little thing was tiring. It may sound picky, but it's a detail that I noticed over and over again.

The second reason why this book could be difficult to read can be found in the character of Kschessinska herself. Throughout the book, she is unapologetically opportunistic. She thinks nothing of using slander and sabotage (among other things) to get what she wants. I found that, after a few pages of her machinations, I wanted to stop and do something else. However, her unflinching honesty was refreshing. She may have enough pride for three people, and she may not be sorry for anything she's done, but at least she tells the truth.

The one thing about Sharp's book that held me spellbound was her depiction of a vanished world. Tsarist Russia may have been filled with decadence and cruelty, but it was also filled with incredible beauty-- a land of vast contradictions as so many countries are.

I enjoyed Sharp's skill in weaving her believable fictional tale around historical figures I've read so much about. She also provided more background into the history of ballet and helped me put several dancers in their proper context.

If you love novels set in the Russia of Nicholas and Alexandra, you should love this book-- as long as your heroines don't have to be scrupulously honest in their morals and behavior.


Buy from Amazon.
Buy from The Book Depository.
Buy from an Indie Bookseller.
by Cathy at Tuesday, January 11, 2011