Drawing the Line by Judith Cutler 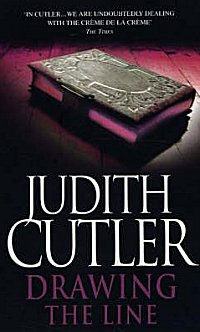 Happiness finally finds Lina Townend at the ripe old age of nineteen. After being in foster care all her life, she's living with kind-hearted old antiques dealer Griff and becoming a very deft hand at restoring old china. There's only one thing missing: no matter the consequences, Lina wants to find her real father.

When Lina comes across a page from a very rare old book that she remembers from her early childhood, she buys it. Her memory of the book and of the room she was in is so vivid that she's convinced that, if she can find the book, she'll find her father. However, what she seems to have done is stir up a hornet's nest of violent burglaries and attacks. Something tells Lina that she's found more than a link to her father, and she refuses to stop searching until she's found all the answers.

I firmly believe that each reader has a distinct interior voice with its own cadence and phraseology. If we're very lucky, we find authors who tap into this so that reading their books becomes an effortless extension of our thoughts.

I'm always on the look-out for books by Cutler, so when the first book in the Lina Townend mystery series fell into my hands, I jumped at the chance to read it, especially since Lina is in the antiques business.

It's easy to empathize with Lina; she's so bright and self-effacing. Cutler has a knack for drawing sympathetic characters from fractured backgrounds who have personal demons they must overcome. After going through the revolving door of foster homes so many times she's lost count, it is wonderful to see how love and kindness make this young woman blossom.

Combine marvelous characterization with a plot full of twists and turns, and Drawing the Line becomes a true pleasure to read. Lina may be young, she may be troubled, she may be naive, but you can't help but cheer on someone who's so determined to succeed: "Hang on: I was not about to be a victim. I was going to think my way through this." You also can't help but become a bit misty-eyed when someone like Lina bursts into tears and says, "It's just so rare...to meet someone who is what he says he is and does what he promises."

I'm hoping you'll make Lina's acquaintance and become as big a fan of Judith Cutler as I am. Go on. You know you want to!