The Lies That Bind by Kate Carlisle 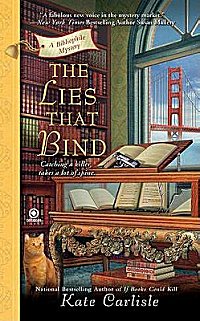 First Line: Layla Fontaine, Executive Artistic Director of the Bay Area Book Arts Center, was tall, blond, and strikingly beautiful, with a hair-trigger temper and a reputation for ruthlessness.

Book restoration expert Brooklyn Wainwright has returned to San Francisco from Edinburgh, Scotland to teach a bookbinding class at BABA (Bay Area Book Arts). She loves BABA but can't stand the program director, Layla Fontaine, a woman who is truly gifted at her job but despised by her subordinates due to her penchant for wielding power as if it were a sledge hammer. However, when Layla is found shot to death, Brooklyn is willing to let bygones be bygones as she tries to identify the killer.

After the second book, If Books Could Kill, I was teetering precariously on top of the fence. There were just too many things about the characters and the story that didn't set well with me. Unfortunately many of the same things bother me in this book, too.

Brooklyn is too immature for me and gets on my nerves. Interested in sexy security expert, Derek Stone, the poor man can't glance at another woman without Brooklyn becoming jealous. It's also awfully easy for her to say that she hates someone. For someone with the flower power parents that she has, one would think that hate would be one word that's not bandied about lightly. For icing on the Brooklyn cake, several people tell her that she's naive and the world's worst liar. She is. I don't think being a terrible liar is a bad thing, but her naivete-- since she's showing no signs of becoming wiser-- could prove fatal.

Two of the characters that make me grind my teeth are Brooklyn's mother and Minka La Boeuf. Brooklyn's mother is supposed to be a flaky version of an Earth Mother. One of the brighter spots in this book is that Mama wasn't trying to force enemas on everyone. Minka, on the other hand, is an evil-tempered psychopath who's just way over-the-top. I keep hoping that she'll be the next victim in this series, but the mad cow refuses to moove off into the sunset.

Speaking of victims, Minka does have one thing right: everywhere Brooklyn goes, someone dies. Two months have passed since the first book in the series, and the bodies are beginning to pile up. If I were expecting to be anywhere near Brooklyn Wainwright, I'd hire a bodyguard.

I love the information about bookbinding that is included in the books, but that can't overcome the problems I have with the characters and plots where the killers are too easily guessed. This is one series that I'm going to let sit on the shelf for a while. With any luck, I'll pick the next book up sometime in the future and begin enjoying the series again.


Buy from Amazon.
Buy from The Book Depository.
Buy from an Indie Bookseller.
by Cathy at Thursday, January 20, 2011