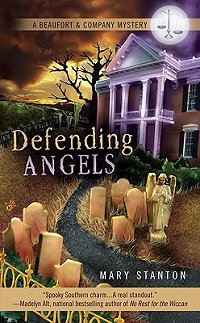 First Line: "Hanged by the neck until dead, every one of 'em," Lavinia Mather said with enormous satisfaction.

In a move from North Carolina to Savannah, Georgia, in order to escape the smothering concern of her parents, lawyer Brianna Winston-Beaufort took her eccentric uncle's inheritance and ran with it. Unfortunately his law offices were damaged in a fire, and Brianna needs someplace temporary to set up shop until the remodeling is done.

What she finds is in a prime section of historic Savannah, the most haunted city in America, and although the offices are in an old home set right in the middle of the only all-murderers cemetery in the state of Georgia, Brianna can't afford to be picky. Especially when the owner, Lavinia Mather, has the rent set so low. Brianna just hopes her future clients won't mind walking through landscaping that looks like it's straight from a Hammer horror film.

It doesn't take long for Brianna to realize that something very strange is going on; for instance her first client is billionaire Benjamin Skinner who calls and demands her services-- after he had been declared dead.

Defending Angels is a fun read highlighted by its plot and unique angle. It's very difficult to say much about the book without giving away some of its secrets, so I won't even try. If you're in the mood for a light, very fun and fast-paced mystery filled with things that go bump in the night, by all means pick up Defending Angels! I've already gotten the second book in the series sitting on the shelf waiting for me.