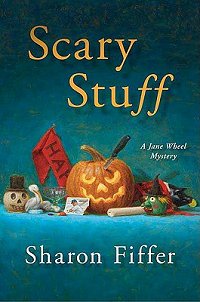 Antique picker Jane Wheel loves old stuff that was never meant to be in a collection-- old aprons and tea towels, orphaned Bakelite buttons, other families' photos... the list is endless--and she's good at it, reselling her estate sale finds to other collectors and adding to the treasure-filled rooms of her own home. These days, she's really a P.P.I., a Picker Private Investigator, because she is also an associate to a private detective. Bakelite buttons and secrets: Jane Wheel is good at finding them both.

Making a rare visit to her brother and his family, Jane was intrigued when Michael told her about the three times he was accused by strangers of cheating them on eBay only to realize they'd gotten the wrong man once they'd taken a good look at his face. Jane agrees to look into it for her brother and returns home to Illinois.

When she's back in Illinois, one of her parents' friends is attacked, and suddenly Jane has two cases, both of which seem a little too close to her loved ones.

Jane grew up in Kankakee, Illinois, and then moved to Chicago where she became a high-rolling advertising executive, got married and had a child. When she decided to put her power suits into storage and start picking, she found herself having much more contact with her childhood best friend and her parents. But even though she spends most of her time in a much more rural setting, she's a bit too much of a city girl:

Country driving always made her nervous. All of these look-alike county roads, numbered or lettered, and no one around to answer any questions about directions. No landmarks, unless you consider the livestock, and one couldn't very well turn at the two cows or go straight past the trotting horse. Jane much preferred the anonymity of a city street to the isolation of the country road.

I've been a fan of Sharon Fiffer and this series since I read the first book, Killer Stuff. Having to wait three years for Scary Stuff was entirely too long, so when I finally managed to track down a copy, there was no way I could let it sit on a shelf.

It doesn't disappoint. There are enough treasures and picking in this book to make me start salivating and wanting to start collecting again. The two cases involving mistaken identity and the attack on a family friend are meaty and kept me guessing. More than anything else, I loved spending time with the characters again. Jane is such a blend of strength and insecurity, and Fiffer isn't afraid to shake up her private life.

Fiffer is also one of the very few writers who can have an extremely annoying character in every single book in the series and not make me want to rip out my hair. Jane's mother, Nellie, is about as exasperating as they come, but the more backstory Fiffer gives her, the more understandable she is. Now, by book six, Nellie has become a force of nature, and sometimes I can even chuckle and shake my head at her behavior, as in this scene:

When Jane had asked the typical childhood questions of her mother-- How did you meet Dad? What was it like when you went to school? Et cetera-- Nellie had refused to participate. Her answers ranged from "I don't remember" to "What's the difference? Who cares?" Michael always said their mother missed her calling. She should have been with the CIA.

Involving plots, an interesting career, characters with depth whose paths are sometimes surprising and rocky, a sense of humor... all reasons for you to pick up a Jane Wheel mystery when you're in the mood for picking with bite.