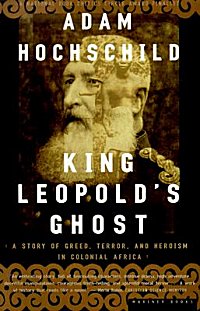 First Line: On January 28, 1841, a quarter-century after Tuckey's failed expedition, the man who would spectacularly accomplish what Tuckey tried to do was born in the small Welsh market town of Denbigh.

Over a century has passed since the events depicted in this book, and the first thing I learned was that-- somewhere along the line-- I had fallen prey to King Leopold II of Belgium's public relations team. For quite a long time, Leopold was known as a great humanitarian. The real King Leopold was quite horrifying.

In the 1880s while Europe carved Africa into colonies to harvest as much of the continent's natural resources as possible, King Leopold II (who scathingly referred to his own country as "small country, small people") was frantic not to be excluded from the feast. The vast colony he seized in 1885 as his private fiefdom included most of the unexplored basin of the Congo River.

Leopold then proceeded to put in place a reign of terror that would end in the deaths of four to eight million people-- a genocide of Holocaust proportions. Those indigenous peoples who survived went to work mining ore or harvesting rubber while Leopold squirreled away billions of dollars in hidden bank accounts around the world.

Although the king's ministers tried to keep a very tight lid on what was really going on in the Congo, the word began to get out and circulate to a wider and wider audience, due mainly to men willing to risk their jobs, their reputations and their lives in order to put an end to the atrocities. Their efforts to expose these crimes led to the first great human rights movement of the twentieth century.

The strength of Hochschild's book is that he uses the wealth of information that can be found in actual eyewitness accounts.  I have to admit that I had to read this book in short doses. Normally I am not squeamish, but as I read what Leopold sanctioned in order to reap untold wealth-- all the while painting himself as a great and wise humanitarian-- I became sickened.

There are those who may read of the genocides in Africa in recent decades and think, "So what? It's just one tribe wiping out another tribe. There are plenty more to take their places. It's not as though white people are being murdered." Once again, a piece of forgotten history shows us that the indigenous peoples of Africa learned all about genocide... from the "civilized" whites.

As painful as this book can be to read, I'm glad I read it-- and I hope you consider reading it as well.


Buy from Amazon.
Buy from The Book Depository.
Buy from an Indie Bookseller.
by Cathy at Wednesday, December 29, 2010