No Badge, No Gun by Harold Adams 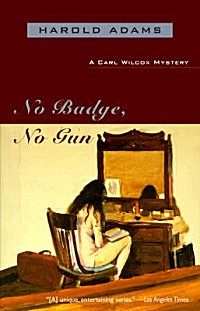 First Line: It was hot in Jonesville just before noon as I was finishing up a window sign and looking forward to getting out of the sun and into a café, when these two characters came around and moved close, watching me.

Those two characters just happen to be the local pastor and his nephew, and they'd like him to check into the rape and murder of the pastor's niece. Carl Wilcox, ex-con, part-time bum, and itinerant sign painter is beginning to get a reputation in small town South Dakota for being able to solve crimes. Since this is the Depression, Carl can't afford to pass up the money, even though he's not trained as a private investigator:

"How'd you get into detecting?"


"Fell in. Being an ex-con, I was a suspect in anything that went wrong wherever I went for a few years, and I started figuring out who done it a couple of times when it kept me from getting stuck, and then one day Corden needed a temporary cop the worst way, and as somebody said, they got the worst kind. That sort of set up my bona fides, and I've been milking it ever since."

While Wilcox paints signs and woos the local school teacher, his investigative methods mainly consist of questioning every person he can think of and seeing what turns up. What turns up are several prime suspects, and Carl soon has to narrow down the list.

Adams has a lean comfortable writing style that drew me right in. It's a deceptively simple style because whenever I stopped to ponder what I'd read, I would realize that I'd gleaned much more than I thought was there.

Even though this is the fifteenth book in the Carl Wilcox series, I didn't feel lost. This book stands very well on its own, but it's so good-- and doesn't have the usual P.I. clichés-- that I fully intend to look up other books in the series.

It's almost the absolute end of the year, and I've found yet another gem!


Buy from Amazon.
Buy from The Book Depository.
Buy from an Indie Bookseller.
by Cathy at Wednesday, December 29, 2010