Every Bitter Thing by Leighton Gage 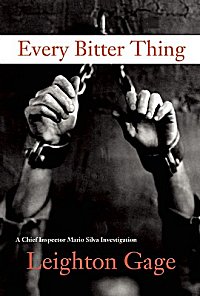 First Line: It was Norma Palhares who first steered her new husband toward the offshore oil platforms.

When the son of the Foreign Minister of Venezuela is found dead in his apartment in Brasilia, Chief Inspector Mario Silva of the Federal Police is brought in to investigate. As he and his men work deeper into the case, Silva discovers that there have been a series of murders throughout Brazil that all have the same MO, and the victims were all passengers on the same flight from Miami to São Paulo. What motive could possibly link all these murders?

I've said this before, but a little repetition never hurts: Leighton Gage writes  my top discovery series of 2010. It is rare to find a crime fiction series that's imbued with such a sense of place, a wonderful cast of characters, and involving plots.

In Every Bitter Thing, it is nice to be out of fishy smelling Manaus, deep in the Amazon basin, and into the cities of São Paulo and Brasilia. The plot takes charge of this fourth book, and although I did miss the oftentimes humorous interactions between Silva and his team, the emphasis on the lives of the victims and the identity of the killer was engrossing.

The only unpleasant thing about my reading experience is that I am now caught up with this series and have to wait impatiently for the next one to be published. Oh well....