Cool in Tucson by Elizabeth Gunn 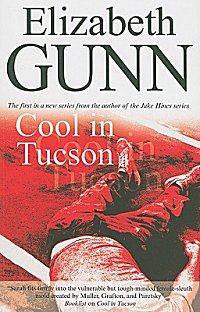 First Line: Didn't even plan it or nothin', Hector thought happily, heading east on I-10, and look how good it turned out.

After a nasty divorce, homicide detective Sarah Burke has been concentrating as much as she can on her job. She's ambitious and has her eye on her boss's job-- which may not be a good thing since her boss has been acting very strangely around her.

That all gets put in her rearview mirror when an early morning jogger trips over the body of a man who's been stabbed to death. Priority is placed on the identity of the victim, and when it's learned that he sold drugs, this fact almost raises more questions than it answers. You see, the victim was a very private, very clean living man who didn't drink, smoke, or partake of his product.

While trying to track down the killer, Sarah also has to deal with some personal issues in the form of a younger sister who goes in and out of substance abuse centers as though they all have revolving doors and her sister's neglected little daughter. All this pales into insignificance when Sarah's niece is kidnapped and Sarah learns that the kidnapping is linked to her murder case.

Reading this book was one of those serendipitous moments when everything fell into place: plot, characters, setting. I enjoyed the Tucson setting, although readers not familiar with the area may feel that Gunn names a few too many streets. Just when I thought I had the plot figured out, Gunn put an interesting spin on the murders that made the conclusion a surprise.

What really made the read for me were Gunn's characters: Hector, the gofer for the local druglord who wasn't nearly as smart as he thought he was; Sarah, working her way through minefields at home and at work; Sarah's sister Janine who never met an excuse she couldn't use to her own advantage; and rising head and shoulders above them all-- Sarah's ten-year-old niece Denny, a wise old soul who's had to learn how to get money for food, launder her clothes, get herself to school, and dodge her mother and the endless round of boyfriends when they're on their latest bender. All the characters-- even secondary ones--came to life for me as I read, but I wanted to grab Denny and take her home with me.

In Sarah Burke, Gunn has created a tough-yet-vulnerable female in the mold of characters brought to life by Muller, Grafton and Paretsky. After having such a wonderful reading experience with Cool in Tucson, I know I'll be looking for the rest of the books in this series.


Buy from Amazon.
Buy from The Book Depository.
Buy from an Indie Bookseller.
by Cathy at Monday, December 20, 2010