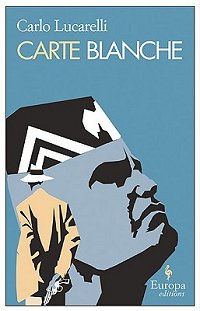 First Line: The bomb exploded suddenly, with a ferocious blast, right as the funeral procession was crossing the street.

In the final year of World War II, as Mussolini's Italy is shattering to pieces, Commissario De Luca finds himself in charge of a murder investigation. The body of well-connected Fascist Rehinard Vittorio has been found stabbed to death and castrated-- and since he was also a drug dealer and philanderer, there is no lack of suspects in his death. The powers that be have promised De Luca their full cooperation... as long as De Luca arrests the "right" suspect.

The plot of this slender little volume moves at the speed of light and leaves precious little time for characterization. De Luca himself was the most sharply drawn, but even he would have been a bit fuzzy if I hadn't read the preface first.

The character of De Luca is based on an actual person who was a policeman in Italy for forty years-- from World War II to the 1980s. Lucarelli found the man to be fascinating:

...after having heard that man recount forty years of his life in the Italian political police, during which with every change of government he found himself having to tail, to spy on, and to arrest those who had previously been his bosses, the question came spontaneously to me: "Excuse me... who do you vote for?"

The man who inspired the character of De Luca always asserted that he was a policeman; politics simply weren't in his job description. Personally, I think he had to have had one of the most finely tuned senses of self preservation on record.

Although there is much to like in Carte Blanche, I found the problems to outweigh the pleasures. The brevity of the book does not lend itself to characterization or to a true sense of the time and place in which it occurs.  The bare bones plot reminds me of my shopping strategy during the holiday season: get in there, get it, and get out. (It also contained few surprises.)  It's likely that the book suffers when read by anyone who is not more fluent in Italian political history. The translation suffered occasionally when slang was involved.

That sounds like quite a bit of complaint for such a little book, and perhaps it is. The reason for it? The character of De Luca, the time period in which the book takes place, and Lucarelli's writing style itself all raised my expectations. After my reading experience with this first book in the trilogy I doubt that I will read the others. Of course... your mileage may vary!


Buy from Amazon.
Buy from The Book Depository.
Buy from an Indie Bookseller.
by Cathy at Monday, December 20, 2010