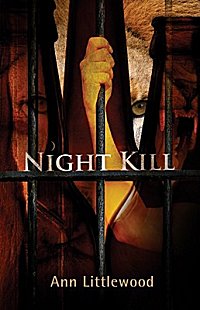 First Line: Hot breath from the lioness touched my cheek.

Iris Oakley loves her job as a feline keeper at the Finley Memorial Zoo in Vancouver, Washington. What she doesn't love is the amount of alcohol her husband Rick is lapping up every night. After a short separation, the two are reconciled, and Rick swears off the sauce. However, the next morning his dead (and dead drunk) body is found in the lion enclosure. Once Iris sorts through some of her initial grief, she begins to deal with no longer being with the big cats and being trained as a bird keeper-- and the feeling that her husband's death was no accident.

When this book concentrates on animal behavior, the day-to-day running of a small zoo, and the training of the keepers, it is first rate. It is obvious that Littlewood, a former zoo keeper, knows her stuff. A scene in which Iris is attacked by a big cat is scary and riveting.

Unfortunately I never felt connected to any of the characters-- including Iris-- and parts of the plot were too easily deduced. Littlewood's second book in the series, Did Not Survive, is available, and I would be interested to see if the characterization and plot in it can rise to match the author's background knowledge. I'd love to see more writing that matches that big cat attack!

Buy from Amazon.
Buy from The Book Depository.
Buy from an Indie Bookseller.
by Cathy at Tuesday, November 02, 2010