The Wine of Angels by Phil Rickman 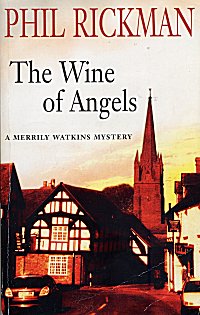 The Reverend Merrily Watkins had never thought she'd find herself posted to a picturesque English village where she'd be expected to live in a huge, drafty vicarage. She also didn't think she'd find herself in the middle of a dispute over a controversial play about a seventeenth-century clergyman accused of witchcraft. It's not long at all before Merrily and her teenage daughter, Jane, find that the village of Ledwardine is far from being the idyllic English village.

Rickman's Merrily Watkins mystery series is one that was highly recommended to me shortly after I joined Paperback Swap. It didn't take long for me to obtain a copy of this book, but for some reason it sat on the shelf for almost two years.

The book is set in an area of Herefordshire where cider making had been an art form for a long time. The author has certainly done his homework because he brings the village of Ledwardine to life, with its half-timbered buildings, its new residents from the city who think they know what's best for everyone, the old residents who know they don't, and all the myths and legends surrounding its ancient apple orchards.

Rickman certainly knows how to set the scene, as when Merrily is finally able to move into the vicarage:

There was quaint, Merrily thought, and there was horribly old-fashioned. Like the steel-grey four-bar electric fire blocking up the inglenook. Like a kitchen the size of a small abattoir with no real cupboards but endless open shelves and all the pipes coiled under the sink like a nest of cobras.

The setting isn't the only thing that Rickman is gifted at doing-- his characters are marvelous. Merrily and her daughter Jane soon felt like people I'd known my entire life. Merrily at first seems to be a quiet, serious person who never learned how to say no. The villagers take advantage of her, and she's soon exhausted and sleep-deprived. But she does have a backbone, and she does have a line that no one should cross. (I cheered when I read that particular scene.) Jane is a typical teenager. You want to hug her one second and strangle her the next. Deep down, she's a good person who can admit her mistakes and learn from them. Merrily should be proud.

Rickman is also very very good at atmosphere. I, for one, will never again walk into an apple orchard the way I always have in the past. I'm not sure I trust the trees, you know.... And that vicarage gave me the creeps!

I've read several other books that mention the resentment villagers feel toward city people who move in, throw their money around, think they know what's best for everyone, and generally believe they should be allowed to take total control of the town. But this is usually glossed over and used more as a secondary prop than anything else. Rickman fleshes this conflict out perfectly and makes it an integral part of the story.

Fleshing out. Rickman is excellent at fleshing out. In fact, he's so good at it that it's the major reason why I didn't rate this book an A+ and wax poetical about it. This book weighs in at 631 pages. The story could very easily have been told in half the number of pages. Granted, I feel as though I've been treated to a very special place and people, and that I know them better than the places and people of hundreds of previous books I've read. However, it's just not a "year's best" read for me when I repeatedly stop reading a book, turn it over and look at the back cover and think, "Is anything ever going to happen?"

Thankfully something did happen. Something spine-tingling and creepy and plausible. And thankfully it happened in Ledwardine, a village well known to me now, and to people I feel as though I've known all my life. On the power of that I now have the second book in the series. It's well over 500 pages. Only time will tell if Rickman ultimately leaves too much flesh on the bones for this reader.


Buy from Amazon.
Buy from The Book Depository.
Buy from an Indie Bookseller.
by Cathy at Thursday, October 07, 2010