Off the Beaten Path: Oatman, Arizona 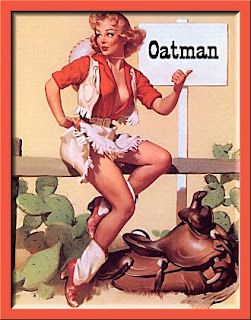 Every once in a while I get a wild hair to tell you about a trip Denis and I have taken. Most of the time I'll tell you about a trail we've jolted and rattled down, but you don't always have to get off the paved roads to go someplace interesting. Even a dirt road junkie like me knows that!

This time I'm going to tell you about the first time Denis and I visited Oatman, Arizona. We took three days off in the middle of the week, packed the Blazer (our first off-road vehicle), and headed northwest. Outside of Wickenburg, we drove to Kingman via the unpaved Signal Road.

We stayed in an old motel right on Route 66 in Kingman. We drove to an old mining town, Chloride, that evening, and spent the entire next day on the Diamond Creek Trail down to the bottom of the Grand Canyon. The last day we drove the Mother Road to Oatman before heading back to Phoenix. Oatman was fun! 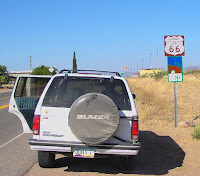 When we left that morning to go to Oatman, the motel manager suggested that we stop at a grocery store to buy carrots, but we didn't drive past any stores, and we soon forgot about the carrots.

Denis was more concerned about a certain photo op, and it wasn’t long until he had his chance: pulling off on the road shoulder, he took a picture of the Blazer sitting beside a Route 66 highway marker.

The first part of the twenty-six mile journey took us along the flat valley floor. This was the Mojave Desert. The saguaros were gone, and the valley floor was covered with yucca, cholla, and Joshua trees. Past the halfway point we were finally in the mountains, and the Mother Road had more kinks in it than a pissed-off rattlesnake. (Very few guardrails either.) The rocky, sparsely vegetated mountains were beautiful in the bright morning sun. The view opened up for miles at Sitgreaves Pass, and we had to stop and take a few photos. It’s possible to see three states from that vantage point.

Shortly after the pass, we began to see the ruins of old buildings—the abandoned town of Goldroad. Like Oatman, Goldroad was a booming concern, but when World War II shut down all the mines in the area, Goldroad died. A mining company has reopened the old works and with new techniques is exacting gold from the ore today.

In no time at all, we were in Oatman. Oatman survived when Gold Road didn’t because it’s the last service stop before you start crossing the Mojave Desert into Nevada and California. We slowly traveled down Main Street, looking at all the old buildings. Of course, there was more than one reason for moving so slowly—we didn’t want to hit the most popular residents of the town. When mining died out in the area, the prospectors moved on, but they left their burros behind. The burros became wild, but they knew a good source of food when they saw it, and they have stayed in the Oatman area ever since.  Denis and I quickly parked the truck and got out to investigate and meet two of the four-legged residents. 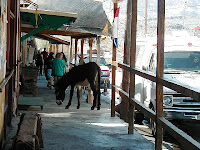 Like any true Old West town, the sidewalks were wooden. Bulletin boards hung outside the entrances of many establishments. I stopped to read a few and this is when I learned that all the burros have names. In fact, not too long ago some desperado kidnapped “Sadie’s” young’un and there’s a reward for the capture of the criminal and the safe return of little “Becky.” In addition, notices on the boards informed visitors what the burros are to be fed. Carrots only. No junk food. The two-legged residents of Oatman don’t want the burros to lose the ability to forage in the wild. No babies are to be fed at all. They choke easily. Ground rules firmly established, Denis and I wandered up and down both sides of Main Street, sometimes having to sidestep other “folks” on the boardwalks.

Oatman was named after Olive Oatman. Her family was ambushed farther down south in Arizona. Two Oatman girls were captured; a brother left for dead and the rest of the family was killed. Olive’s sister died during their captivity. Olive was traded to the Mojave Indians, and she was with them when she was rescued. One of the establishments in town bears her name. There were many interesting shops in Oatman. Oatman and Route 66 t-shirts seem to be the most popular items for sale, but just past the store selling Crackpot Jewelry, Denis and I were both mesmerized by a large display of wind spinners. We looked at them all, talked with the artist, and finally bought a copper-colored kokopelli to bring home to Phoenix. 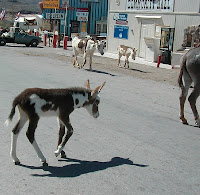 On our way back to the Blazer, we met Oatman’s youngest resident, Jay Jay. Jay Jay was eleven days old and had the tendency to taste anything he came across. It was fun to watch his progress down the street.
One last stop to help boost the Oatman economy and we were ready to head to Phoenix. But we were thirsty. Where would be a good place to go in for a couple of cold ones? We looked around, took the advice of the residents, and stopped at the Route 66 Deli. We weren’t led astray!


If you're traveling through Arizona on Interstate 40, consider spending a couple of days in Kingman. You can visit the West Rim of the Grand Canyon, which is now home to the Skywalk. You can visit old mining towns full of character like Chloride and Oatman. And you can travel one of the best stretches of the Mother Road, Route 66. Denis and I have had visitors from Washington and England that we've taken on this trip, and they both loved it.

Email ThisBlogThis!Share to TwitterShare to FacebookShare to Pinterest
Labels: Arizona, Oatman, Off the Beaten Path