A Little Death in Dixie by Lisa Turner 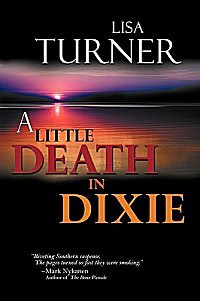 Well-known Memphis socialite Sophia Dupree is missing. At first thought to be on just another one of her drunken binges, the longer she's gone the more people wonder if she's learned a new trick-- or if something serious has happened to her. Detective Billy Able is on the case, and with the help of Lou Nevers, the partner he's always hero worshipped, Billy believes they'll get the answers they need. But Lou goes off the rails, and Billy finds himself with the most unlikely of partners: Mercy Snow, the estranged sister of the missing Sophia.

As Billy steps up his investigation, he finds himself underneath a huge overturned can of worms. Each worm seems to be a long-buried secret, a deadly plan set in action, corrupt motivations, thoughts and deeds. Billy soon wonders if he's ever really known the truth-- and will he learn all the truth before it's too late?

Starting with the dead man in the marigolds, A Little Death in Dixie grabbed me by the throat and wouldn't let go. The life story of the dead man's wife, Mrs. Lady Tuggle, broke my heart and planted the seed in my mind that I was reading a very special debut novel.

The book has strong elements of Southern Gothic that are very well done. (The epitome of Southern Gothic, for me, has always been William Faulkner's "A Rose for Emily.") For the most part, the bad guys aren't hidden, and the reader's job is not to guess their identities, but to piece everything together to get a complete picture of the bad guys' agendas. Let me tell you, those agendas are enough to curl your hair... or straighten it as the case may be.

I was completely hooked by Billy and Mercy, and I wouldn't mind reading about them again. Lisa Turner is an author to watch.