The Anteater of Death by Betty Webb 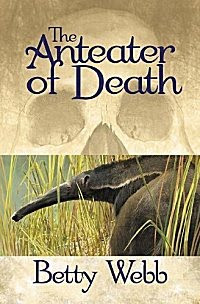 First Line: Intrigued by the commotion underneath the banana palm, Lucy curled her four-inch claws under her leathery pads and moved forward on her knuckles to investigate.

If Lucy, the pregnant Giant Anteater at the Gunn Zoo in central California, didn't kill the man found dead in her enclosure, who did? It's up to her keeper, Teddy Bentley, to find out before the anteater is shipped to another zoo in disgrace.

Before Teddy can really get started, another human bites the dust, the monkeys have a hissy fit, the wolves are in a tizzy, and the rich Harbor folks are trying to evict Teddy from her houseboat. Has Teddy got what it takes to save Lucy-- and herself?

I have long been a fan of Webb's series set right here in the Phoenix metropolitan area which feature P.I. Lena Jones. The only other mystery writer who gets the Phoenix area "right" is Jon Talton. (Take a look at my Favorite Mystery Series page for more information. Webb and Talton are both there.) I also know that Webb can do humor after reading her blog entry about being left at a truck stop while on a book tour. When I learned that she was starting a new-- and cozier-- series featuring a zookeeper, I was eager to try it out.

Although The Anteater of Death features one of those characters I want to slap-- the Annoying Mother-- I really enjoyed the book. Teddy has a good sense of humor that made me laugh out loud more than once, she truly cares for animals, she deals as best she can with The Mother, and she has good instincts on how to conduct an investigation:

Since I couldn't seem to find any actual clues, the solution to the mystery might be found in behavior. For all their purported brainpower, people are still animals. Deny them food, exercise, or sex, and they get cranky. Threaten them and they become downright dangerous.

Although the Bad Guy should've been obvious to me, the reveal came as a surprise-- mostly because the book was filled with attention grabbers, both two- and four-legged. This isn't called a "Gunn Zoo mystery" for nothing. Animals do play significant roles in the book, so if you're allergic, this may not be the book-- or the series-- for you. I loved the plot, the setting, most of the characters, and all the animals.

Webb did most of her research right here at the Phoenix Zoo, where Jezebel was the role model for the book's anteater, Lucy. (I had fun watching her one morning when I visited.) I find it amusing that I'm writing this review on the day that it was announced the Phoenix Zoo would be having two koalas visit for a period of six months. Why do I find that amusing? (1) Every time I've gone to the San Diego Zoo, the koalas have never been out and about. I wonder if I'll have better luck on my home turf? (2) Webb's second Gunn Zoo mystery is titled The Koala of Death. Did she know something the rest of us didn't?