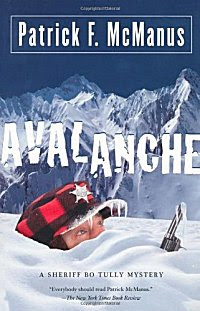 First Line: He stood at the window studiously watching the large fluffy snowflakes fill up his mother's backyard.

With all the snow that's fallen in Blight County, Idaho, Sheriff Bo Tully is glad that business is rather slow and he's got time to visit his mother to eat pie and listen to the latest gossip. Seems like the only trouble spot on Bo's horizon is that Clarence is back and sitting in one of Bo's jail cells.

Who's Clarence? A scruffy little dog that likes to hide under cars and dart out to bite people in the ankles. Bo wants the dog to "disappear" but none of his deputies seem to be getting the message.

In the meantime, Mike Wilson, the owner of the pricey West Branch Lodge, has gone missing, and Bo agrees to go up there with a tracker and his father, Pap Tully, to look for the man. They're just about at the Lodge when an avalanche almost wipes out Bo's Explorer (as well as Bo and Pap). They are going to be stuck at the West Branch Lodge for the foreseeable future until the roads are cleared.

Being cooped up with his father and a motley assortment of guests (including a group of college students on break with nothing but extreme sports-- and extreme beer drinking-- in mind) does Bo no good at all. Everyone is looking like a suspect to him, but he's got to make sense of it all before the roads are cleared and all the guests leave.

I loved this book, from the convoluted trail to the killer to the location to the smorgasbord of marvelously drawn characters. Even Clarence the dog was a wonderful bit of characterization.

I think one of the reasons why I have been enjoying this series so much is that it's bringing back fun memories of Grampa and his hunting, coffee-drinking, poker-playing buddies at the Legion Hall. Those guys could spin yarns, and I could sit there and lap up every single word. Bo, his father, and the other characters in Avalanche are following this fine tradition, but the book isn't so "manly" that females who haven't gone hunting or who haven't played poker at the Legion Hall won't be interested. There are some interesting female characters in the books, along with a bit of romance here and there.

Granted, the man stuff and the humor figure more prominently. When Bo learns that he and his men will be staying at the very expensive West Branch Lodge while they search for the missing owner, I laughed at Bo's reaction:

"Oh, the county will pick up the tab. Several of the county commissioners haven't dropped dead at the sight of my expense account, and I'm trying to finish them off."


If you're in the mood to laugh and be entertained while you read well-plotted mysteries, I hope you'll think about trying one of Patrick McManus's Sheriff Bo Tully mysteries.