A Beautiful Place to Die by Malla Nunn 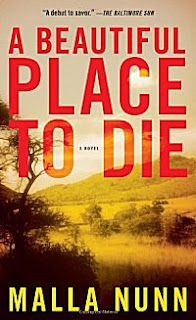 First Line: Detective Sergeant Emmanuel Cooper switched off the engine and looked out through the dirty windscreen.

It is 1952. The apartheid laws have just been enacted in South Africa. Jacob's Rest is a small town on the border of South Africa and Mozambique. When the local police chief's body is found, Detective Sergeant Emmanuel Cooper is sent-- all by himself-- to the town to solve the crime. He soon discovers why he was sent alone: the Security Branch has been dispatched to take control of the investigation. It takes less than 1% of Cooper's deductive reasoning to see that the Security Branch has its heart set on a black communist murderer, and its officers will stop at nothing to procure this result.

The presence of the Security Branch's thugs means that Cooper's job is going to be extremely difficult, but his boss wants him to continue to dig. As Cooper questions people of all races and social strata in Jacob's Rest, he begins to see that the murdered Captain Pretorius wasn't the man he appeared to be, but bringing the killer to justice might mean his death by Security Branch means or igniting a powder keg of racial tension... or both.

This book was extremely difficult to put down, and I probably pouted a time or two when I was forced to stop reading. With seemingly very little effort, Nunn transported me right in the middle of apartheid South Africa-- and I didn't like it. I was so involved in what I was reading that I felt as if one wrong word, one incorrect facial expression, would find me thrown in one of their jails. I love reading books that have such an immediacy to them-- even when it makes me uncomfortable.

The primary characters were well-drawn and multi-faceted. The more I learned about them, the faster I read because they oftentimes surprised me. A few of the secondary characters seemed a bit two-dimensional, but as far as I'm concerned when you're a bigot who only knows how to spout hatred and the party line, you don't always deserve that extra dimension.

Malla Nunn has the gift of perfect description in a mere line or two. Here are some examples:

"A knot of three white men stood farther up the riverbank and took turns drinking from a battered silver flask. They were big and meaty, the kind of men who would pull their own wagons across the veldt long after the oxen were dead."

"They look like they can beat a confession out of a can of paint."

"There was the quiet murmur of Zulu before a pencil-thin woman in a yellow dress gave a shout and ran for the Packard. Emmanuel stilled as the woman hauled the miner into a sitting position in the backseat and wailed out loud. The sound was an ocean of sorrows."

I also enjoyed the complexity of the mystery. As soon as I thought I'd solved something, Nunn (through Cooper) either set me on my ear or showed me that there was more to the case than I'd originally believed. I'm going to be very surprised if this book isn't among my Top Ten Reads of the year.

Nunn's next book in the series, Let the Dead Lie, is now out. Do you know how difficult it is for me to leave it alone? I thought you bookaholics would understand!

Buy from Amazon.
Buy from The Book Depository.
Buy from an Indie Bookseller.
by Cathy at Thursday, July 29, 2010