Blood of the Wicked by Leighton Gage 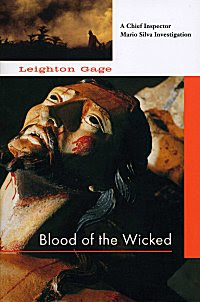 First Line: Something took the helicopter and shook it like a jackal worrying a carcass.

Chief Inspector Mario Silva of the Federal Police is called upon to travel to remote Cascatas to investigate the assassination of a bishop. When he arrives, he finds himself in a veritable vipers' nest of crime and corruption: the bishop's assassination, the disappearance of a wealthy landowner's son, the continuing conflict between the landowners and the Landless Workers League, the deaths of homeless street children, drugs... the list seems endless. With Colonel Ferraz of the State Police in Cascatas firmly against Silva, will the inspector be able to solve any of the crimes in this remote area of Brazil?

I was bowled over by this book. First and foremost, what impressed me was how thoroughly Gage immersed me in modern Brazil. Until picking up Blood of the Wicked, the books I'd read about this country centered on a bit of colonial history, and lots of Amazonian exploration. In reading about present-day Brazil, I became acquainted with favelas (shantytowns), with the fact that dead street children are referred to as "hams", with the age-old struggle between the Haves and the Have Nots, and with a degree of police corruption that made me ill.

Although the book is excellent armchair travel, it had to be coupled with believable characters and a strong story line to get this sort of reaction from me. Chief Inspector Mario Silva is a man of principle. As a young man facing total police disinterest in finding the men responsible for the deaths of his parents, Silva took the investigation-- and the law-- into his own hands. This serves a dual purpose. The reader does become unsure of Silva's reactions and methods in Cascatas, but there is also the belief that he will fight for justice in the face of any amount of corruption.

Another character stands head and shoulders above all others: State Police Colonel Ferraz. He literally became a man I loved to hate, and I couldn't wait to see what Silva had in store for him.

Blood of the Wicked can be very brutal-- murder, torture, the corruption of absolute power, the desperation of poverty-- but the depiction of the country and the dedication of Chief Inspector Mario Silva kept me mesmerized to the final page.
by Cathy at Thursday, May 06, 2010