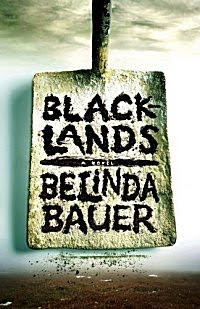 First Line: Exmoor dripped with dirty bracken, rough, colorless grass, prickly gorse, and last year's heather, so black it looked as if wet fire had swept across the landscape, taking the trees with it and leaving the moor cold and exposed to face the winter unprotected.

Twenty years ago, Stephen Lamb's Uncle Billy disappeared, never to return. Since Uncle Billy was eleven and serial killer/ pedophile Arnold Avery was trolling the moors at the time, it was assumed that Billy fell prey to Avery.

Twenty years later, Stephen Lamb's grandmother is still waiting at the window for her son to return. Twelve-year-old Stephen is sick to death of having to deal with the nasty tempers of his grandmother and mother; he's tired of being followed around by his five-year-old brother; he doesn't want to smell like mildew anymore; and if the school bullies left him alone, he would think he'd won the biggest lottery ever.

In his mind, everything went to pot when Uncle Billy disappeared. If he could only find Billy, his grandmother would stop waiting for his return, and maybe-- just maybe-- life might become more livable. With that in mind, Stephen takes a shovel out to the moor and digs hole after hole after hole. Uncle Billy has to be there somewhere. He finally comes to the conclusion that he needs help in finding Uncle Billy's remains, and who is the only person qualified to help? That's right: Arnold Avery. So begins a correspondence that's enough to make anyone's skin crawl.

This book does not read like a first novel. Bauer does an excellent job of portraying how tragedy has affected this family and to what lengths young Stephen will go to have even the slightest bit of normality in his life. Three quarters of the book is very quiet and very very powerful; however, the ending is a bit far-fetched and dilutes that intensity.

Regardless of the ending, I am still very impressed by this story. Young Stephen Lamb remains crystal clear in my mind, and I will keep an eye out for more books by Belinda Bauer. She has quite a talent.

[Note: Although the book does deal with pedophilia and the murder of children, these themes are handled in a straightforward, non-graphic manner-- which can be even more chilling because your mind is free to add all the details.]
by Cathy at Thursday, May 27, 2010