Death By the Book by Lenny Bartulin 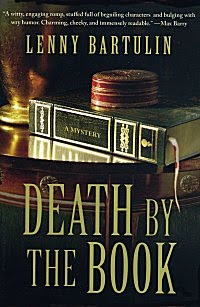 First Line: It was perfectly clear to him now, dangling in the wet tussock cleavage of a broad hill that slid towards the headland cliffs.

Used book dealer Jack Susko thinks it's his lucky day: wealthy businessman Hammond Kasprowicz has offered him $50 for every copy he can locate of the works of little-known poet, Edward Kass. Jack needs the money, so he tries to keep a firm rein on his curiosity, although his libido certainly isn't held in check when Kasprowicz's daughter, Annabelle, walks onstage. Then dead bodies start cropping up.

I have to admit to being disappointed in this book. The action occurs in Sydney, Australia, but you'd never know it. It makes me wonder if the book was given the Strip Mall Treatment for American readers. You know... the Americans who won't be caught dead reading about someone who actually has the gall to live in another country? One of the reasons why I read books set in other countries is for the local ambiance. I want a real sense of place of which this book has none. The Aussie friends I have would never live in such a bland place.

Bartulin has a wonderful way with language, but it wasn't enough to carry the book above average for me. What was the biggest letdown? Jack Susko was a private eye in disguise, complete with snappy comebacks and the drop-dead gorgeous dame who stalks into his office and steals his heart-- and naturally Jack falls for every word that falls from her pouty lips, the idiot.

With a standard P.I. plot, there were no surprises for me in Death By the Book. I picked the book up expecting something more along the lines of John Dunning's bookseller, Cliff Janeway. What I got was well-written Gumshoe. Too bad I'm not a fan.
by Cathy at Thursday, May 27, 2010