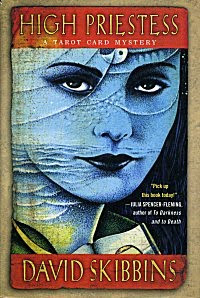 First Line: When was he going to get here?

The power of this mystery series lies in its main character: "Warren Ritter", a 60s radical who's been hiding from the law for over thirty years. Back in the 70s, he managed to divert some money into a tidy Microsoft nest egg, and now he has a table at Telegraph and Haste in Berkeley, California, where he reads tarot cards for enjoyment.

When a beardless Santa-like man approaches Warren and uses bribery and a threat to expose his true identity, Ritter resists being hired, but not for long. The man is the leader of a satanic cult and the twin brother of a woman who had a profound impact on Warren's life. Being able to meet Her again has Warren accepting, and when he begins to investigate, the body count starts to rise.

One thing that makes Warren an interesting character is that he's bipolar and has found a way to cope with the highs and lows. (And he's very quick to say that his coping mechanism isn't for anyone else but him.) He's also a child of his times. If you didn't grow up during the 60s, Warren won't hold any nostalgic appeal for you, but I smiled with recognition whenever he would say something like this:

Labor Day, the first Monday in September; it shouldn't be a holiday, it should be a wake. The international megacorporations have gutted the labor movement. These days the holiday is celebrated by running down to the big sale at Target to stock up on designer jeans stitched together by children working twelve hours a day in Southeast Asia.

The mystery in High Priestess is an involving one that takes both Warren and the reader deep into his history and the reasons why he is hiding from the law. His investigation also endangers the relationship he's been working on with Sally. Skibbins' series has strong characterizations and refreshing originality. I'm looking forward to reading more in this series.
by Cathy at Thursday, April 22, 2010