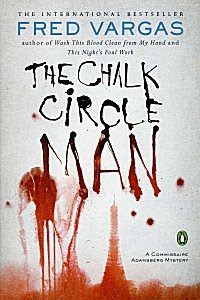 First Line: Mathilde took out her diary and wrote: 'The man sitting next to me has got one hell of a nerve.'

Jean-Baptiste Adamsberg grew up in the foothills of the Pyrenees, became a policeman at the age of twenty-five, and after a series of promotions and the passage of twenty years, he finds himself as Commissaire in Paris. Back home Adamsberg was something of a legend:

"You sit around daydreaming, staring at the wall, or doodling on a bit of paper as if you had all the time and knowledge in the world, and then one day you swan in, cool as a cucumber, and say 'Arrest the priest. He strangled the child to stop him talking.'"

Great things are expected of him in Paris, but when he focuses on a case that makes everyone else laugh, some begin to wonder if Adamsberg's reputation is all hype.

Almost everyone in Paris is laughing over The Chalk Circle Man, and they scan the newspapers each day to see what bizarre object has been enclosed in a blue chalk circle. Will it be another beer can? Or how about another trombone? Only Adamsberg doesn't think it's funny, and when the next blue chalk circle is around the body of a woman whose throat has been slashed, people begin to realize that the quirky policeman may not be a hayseed after all.

I loved this book. The translation by Sian Reynolds was excellent, and I felt as though I were walking the streets of Paris with Adamsberg. The plot had enough twists and turns in it that, although I'd deduced some things as I read, I was still surprised at the end and laughed with pleasure.

Excellent translation, strong sense of place, nice twisty plot... all those things are important, but it's the characters who stick with me the most. Adamsberg who lets no one keep him from conducting investigations his way. Mathilde, a woman who follows random people through the streets of Paris, observes them, and often takes them under her wing. And Clémence, a septuagenarian who hasn't given up on love and is an avid follower of the "lonely hearts" ads in the newspapers. These characters are what make The Chalk Circle Man sparkle, and they are what make this book memorable.

[Source: Christmas gift from my husband.]