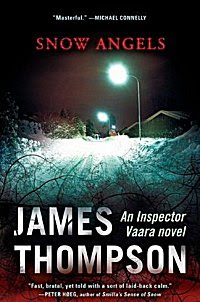 First Line: I'm in Hullu Poro, The Crazy Reindeer, the biggest bar and restaurant in this part of the Arctic Circle.

I've been feasting from the smorgasbord of Scandinavian mysteries for the past couple of years, so when I discovered a new-to-me crime fiction author from Finland, I couldn't wait to get a copy of the book.

One thing you may have noticed up above in the "Just the Facts" section of this review is that I don't list a translator. James Thompson is Kentucky -born and -raised. He's fluent in Swedish and Finnish and has lived in Finland for the past ten years. He's in the enviable position of not needing a translator. But I digress.

It's Kaamos, the bleakest time of year in Lapland just before Christmas. The unrelenting darkness and extreme cold above the Arctic Circle seem to make the residents drink to excess and do crazy things. Inspector Kari Vaara is used to this, but when a beautiful Somali immigrant's mutilated body is found in a snowfield, he knows that he has a potentially explosive situation on his hands. This murder could be a hate crime. It could be a sex crime. It could be both, but it's essential that Vaara keeps this case out of the national news because it could rock this small xenophobic nation to its foundations.

Once again I found myself immersed in a story where the setting is a character in itself. In this case, it was a very unsettling character for me because one of my ideas of hell is a place that's always dark and always cold. Thompson skillfully lets the landscape work its way under the skin without going over the top. I liked that.

I also liked the character of Vaara. Vaara is haunted by his rough childhood and his failed first marriage. His young American wife is finding it very difficult to adjust to Arctic climate and Finnish isolation and silence.

The pacing of Snow Angels flowed smoothly, and although I found the identity of the killer rather easy to solve, learning about Finland, the characterizations and the setting of the book more than made up for that one glitch. I'm really looking forward to reading Thompson's next book.