Devils in the Mirror by Lesley Horton 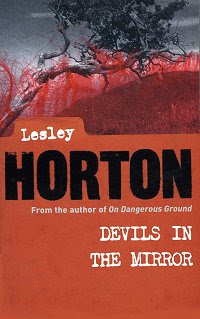 First Line: Eleven forty-five on the last day of October.

It's almost midnight on Halloween when firefighters find the body of young Shayla Richards out on the moor. Photographs taken at the scene suggest that it might be ritual sacrifice. When Detective Inspector John Handford and Detective Sergeant Khalid Ali begin their investigation, they learn that Shayla had been at the center of another police investigation that had very disturbing implications. As more and more people are interviewed, it also appears that Shayla was a compulsive liar. Just what is truth and what fiction in this young girl's death?

This series first came to my attention because it is set in Bradford, England. A very long time ago, I had ancestors living outside Bradford, and I've visited the city twice now. It is known for having a large Asian population, and in fact you can drive through sections of Bradford and never dream you were in England. So... the setting is what first came to my attention.

The second thing to come to my attention when reading this series was Horton's depiction of the very sensitive issues of race and religion that the police have to face in Bradford on a day-to-day basis. Her main character Detective Inspector John Handford knows what it's like to be accused of being racist. Having dodged that particular bullet, the powers-that-be seem to have a perverse sense of humor-- assigning a Muslim detective sergeant to Handford. Both are very prickly individuals for entirely different reasons, and it's been interesting to see them learn to work together as the series progresses.

A potential powder keg of a setting. Two extremely strong-willed characters who don't always see eye-to-eye. Investigations involving unfamiliar cultures and lots of hard work "by the book". Yes, I have been enjoying this series, but Devils in the Mirror ratcheted everything to a completely new level and wound up knocking my socks off.

Horton shakes up things with her characters in this one. Not content to leave everything to her mainstays, Handford and Ali, she brings in the controversial Detective Constable Warrender and Handford's own wife who teaches in the school where Shayla Richards was a student. As the investigation continues, the lives of the troubled teenagers who were Shayla's friends come to light, as well as the lives of their parents. One by one, suspects are brought into the spotlight and either eliminated or made into persons of interest.

This is one of the most densely layered, satisfying police procedurals I've read in a long, long time. There are a lot of characters to be found in Devils in the Mirror, but none of them hit a false note and none are surplus to requirements. Everyone matters in this book. Everyone contributes a piece to the puzzle. With the large cast and all the individual threads to the plot, you might think that this book would be very confusing, but it's not in the least. Devils in the Mirror requires a large canvas because it's not just about the murder of a young girl. It's also about everyone who had a hand in creating these "throwaway" children, and just what is thrown away and irretrievably lost as a result.

Horton's book works on so many levels: a complex, satisfying plot; multi-faceted, real characters; hard, unrelenting, dogged police work; and sensitive social issues. Halfway through the book, I was in awe. I wanted to slow down and savor each paragraph; I wanted to gulp it down as fast as I possibly could.

I settled for a sedate sprint. You see, I have the next two books in this series sitting on a shelf not very far away. If that sounds a bit smug, it is!

[Source: Purchased at The Poisoned Pen.]
by Cathy at Wednesday, January 20, 2010