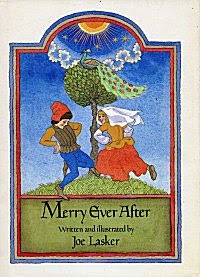 First Line: Anne was only ten years old when her father told her she would marry Gilbert, who was eleven.

This beautifully illustrated children's book is written by Joe Lasker, who also happens to be the illustrator. It is the story of two young European couples: Anne and Gilbert and Margaret and Simon, and how it came about that they married way back in the fifteenth century.

Anne was ten when her wealthy merchant father began looking for a suitable husband for her. With his wealth, he wanted to aim high. Eleven-year-old Gilbert's father was a nobleman who'd spent much of his fortune on equipping himself and his soldiers for war. The two fathers met and eventually came to terms over the dowry. Anne and Gilbert would be married when Anne turned fifteen.

Fourteen-year-old Margaret was a blacksmith's daughter. Simon, a year older, was already a plowman working with his father out in the fields. They all lived in the same small village, and although they had much less dowry to work with, both fathers made sure they were satisfied on all counts before their children were betrothed. Lasker then describes both marriages and their subsequent celebrations.

In his introduction, Lasker stated that, although there are differences between Medieval marriages and the ones of today, there are also many similarities because many wedding traditions date from that time. He uses simple, straightforward language to tell the story of the two young couples. 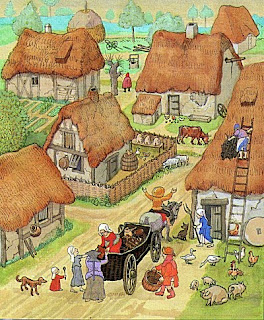 What makes this book so special, however, are the marvelous illustrations. They are vivid and detailed. The longer I looked at each one, the more I found to savor. (Usually there was more than one bit of sly artistic humor to chuckle over as well!) This is a book in which all ages can easily find something to enjoy.