The Fabergé Secret by Charles Belfoure 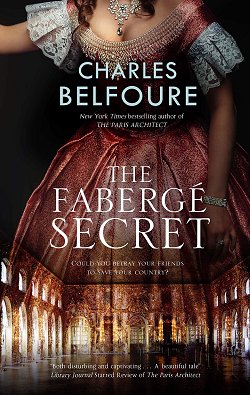 First Line: The Tsar stood up from the dinner table and smiled at Dimitri.
St. Petersburg, 1903. Prince Dimitri Markhov has been sheltered by his family's wealth and privilege his entire life, and he's proud to be a close personal friend of Tsar Nicholas II and Tsarina Alexandra. Spurned by his spiteful wife, Dimitri channels his energy into his occupation-- architecture-- and a series of affairs. All this begins to change when he meets Dr. Katya Golitsyn and when he is confronted by the death and destruction of a pogrom. Dimitri is horrified and becomes determined to make a stand no matter the cost to himself.
~
With this second book that I've read written by Charles Belfoure, I am now convinced that he's not the writer for me. As in The Paris Architect, a self-absorbed man suddenly becomes a staunch defender of the oppressed. Belfoure, who is an architect himself, has a knack for choosing architecture and historic periods that fascinate me. In The Fabergé Secret, it's the reign of Nicholas II and Alexandra. This is a period in Russia filled with incredible beauty and indescribable brutality, and Belfoure does well in depicting the pogroms that were rife in the country at the time. But then... there's the rest of the story.
In reading The Fabergé Secret, it felt as though Belfoure fell so deeply in love with his setting that he forgot all about including any action or real movement in the plot until well past the halfway point in the book. I was left wondering if anything was ever going to happen. The author also felt comfortable in sacrificing well-known historical facts to his fictional tale.
At the end of the day, I found The Fabergé Secret to be a predictable, standard, historical romance laced with a bit of architecture. A pleasant diversion that could have been so much more.
The Fabergé Secret by Charles Belfoure
eISBN: 9781448304462
Severn House Publishers © 2021
eBook, 256 pages
Historical Fiction, Standalone
Rating: D+
Source: Net Galley
by Cathy at Monday, January 04, 2021