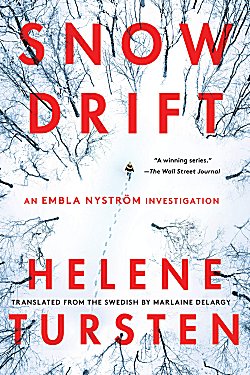 First Line: The front door slowly opened a fraction of an inch.
Detective Inspector Embla Nyström was fourteen when her best friend Lollo disappeared from a nightclub, and Embla has been haunted by it ever since. When she recognizes her friend's voice on the phone before the call was cut off, Embla is thrilled that her friend is still alive, but before she can begin to search for Lollo, work intrudes.
A man has been found shot dead in one of the guest houses run by Embla's relative. Can she come take a look? When she arrives, she's stunned to see that the dead man is a well-known gang member and one of the last people seen with Lollo. Moreover, the same night that Milo was killed, his brother Luca was also. Who's targeting these brothers-- and where is brother number three? Embla launches her investigation with the help of a local detective and his police dog in training and hopes against hope that she will finally find Lollo and put an end to her nightmares.
~
Helene Tursten is skilled at crafting mysteries that keep you wanting more. I love her Detective Inspector Irene Huss series, but for some reason after reading three books in this new series, I can't seem to warm up to Embla Nyström. I think it is partly due to the fact that this younger woman keeps everyone at a distance and has a tendency to look down on anyone who doesn't eat as healthy as she does. Lighten up, Embla! For whatever reason, I can't quite put my finger on why she leaves me cold. (But I certainly appreciate Tursten keeping us informed about Irene Huss who works in the same unit.)
What I can put my finger on is that Snowdrift needed some tightening up by fifty pages or so-- and that the twist at the end which is supposed to be a shocker didn't surprise me at all. Not every book in a series can be a barnburner, and for me, Snowdrift was decidedly flat. Combine that with the fact that I can't get enthused about Embla, and I have doubts about continuing with this series.
Snowdrift by Helene Tursten
Translated from the Swedish by Marlaine Delargy.
eISBN: 9781641291613
Soho Press © 2020
eBook, 384 pages
Police Procedural, #3 Embla Nyström mystery
Rating: B
Source: Net Galley
by Cathy at Thursday, December 10, 2020