Poppy Redfern and the Fatal Flyers by Tessa Arlen 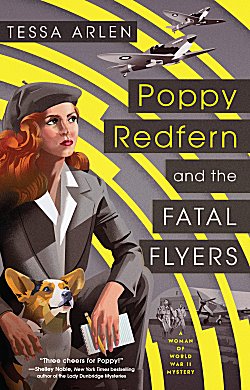 First Line: "Miss Redfern? For heaven's sake, where is she?"
In late autumn of 1942, Poppy Redfern is immersed in her new job as scriptwriter for the Crown Film Unit. The primary function of the CFU is to keep British morale high, so when Poppy learns that she's part of the team going to film the Attagirls, a group of female civilians who work for the Air Transport Auxiliary flying planes from factories to countless airfields, she can't wait to get there.
Poppy is thrilled to meet and talk with these amazing women, and when two of the very best of them die in what are deemed "accidents," she and her American fighter pilot boyfriend, Griff, believe that someone is targeting the Attagirls, and they want to find the person responsible before the killer strikes again.
~
Having really enjoyed the first book in this series, Poppy Redfern and the Midnight Murders, I couldn't wait to read this one. I wasn't disappointed. Author Tessa Arlen put me right in the middle of not only a film crew but also an amazing group of women who flew for the Air Transport Auxiliary. I've read about them, and I am so pleased that a great deal of World War II women's history is finally coming to light. These women flew planes in all sorts of conditions-- new, repaired, damaged-- in all sorts of weather to all parts of Britain as well as France and Belgium. The planes they flew had no weapons so they couldn't defend themselves, and they were not allowed to use the radios. (Heaven forbid. They're women and might start chattering away. The Royal Air Force was really a dinosaur in its attitudes.) Many of these women had far broader flying experience than their male counterparts in the RAF, but when they landed their planes at RAF fields most of the time they were allotted no sleeping, bathing, or toilet facilities. However, they weren't in it for the perks; they loved what they did. (Read Arlen's notes at the back of the book.)
Poppy's job as scriptwriter gives her carte blanche to interview the Attagirls multiple times which really helps in her investigation. My liking for Poppy continues to grow. She's brave, intelligent, and resourceful, and her behavior around her American fighter pilot boyfriend can make me smile.
The mystery is a good one, too. In fact, I am happy to report that I was only partially correct about the solution, and-- due to the number of mysteries I read-- I always like when that happens. Anyone who is even remotely familiar with Agatha Christie's work will do a double-take just like I did when they come across a certain sentence. (Don't worry, I'm going to let you find it for yourselves.)
Poppy's job in the Crown Film Unit has the potential to take her to all sorts of places, and I certainly look forward to joining her in all of her adventures. Now comes the wait for book number three.
Poppy Redfern and the Fatal Flyers by Tessa Arlen
eISBN: 9781984805836
Berkley Prime Crime © 2020
eBook, 320 pages
Historical Mystery, #2 Woman of World War II mystery
Rating: B+
Source: Net Galley
by Cathy at Monday, November 30, 2020