Women in the Great War by Stephen Wynn & Tanya Wynn 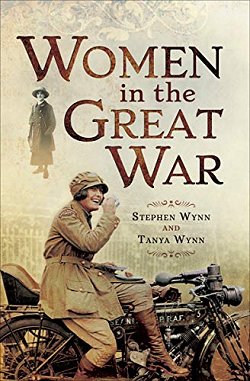 First Line: The First World War, or the Great War as it was initially referred to, was undoubtedly responsible for a big change in the lives of British women, but it was not the sole reason behind their eventual emancipation.

Even though one can be well-versed in a subject, one can always learn more, which is why I'm glad I read Women in the Great War. This little book reads quickly and packs more of a punch than you might initially think-- and the illustrations add icing to the cake.

Although it does concentrate on British women, the book does cover the incredible accomplishments of women in other countries, and I'd never heard of these women before so I really appreciated their inclusion. Outlining how women's lives in Britain were before World War I, Women in the Great War then moves on to each organization that played an important role in the war effort. Toward the end, the book turns into a roll call of those women who lost their lives in service to their country. Some might consider this roll call boring, but I found it touching. It's probably the first time most of these women's names (and what they did) have ever been mentioned.

Women in the Great War by Stephen Wynn & Tanya Wynn