The Spirit Woman by Margaret Coel 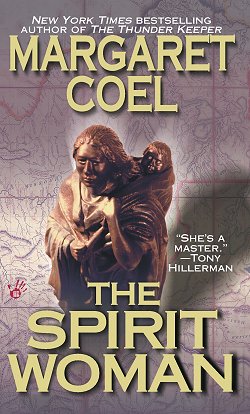 First Line: Father John O'Malley pulled up the collar of his jacket and dipped the brim of his cowboy hat against the hard wind whirling little pellets of snow into the air.

Legend has it that Sacajawea, the Native American woman who helped guide the Lewis and Clark expedition through the vast American wilderness, is buried on the Wind River Reservation in Wyoming. A college professor and longtime friend of Arapaho attorney Vicky Holden has disappeared while searching for documented evidence of that legend.

Holden and Father John O'Malley become increasingly concerned when her missing friend is linked to another female historian who also vanished on the reservation while researching Sacajawea twenty years ago. The answer to these disappearances may lie in the pages of Sacajawea's hidden memoirs, but someone is willing to do anything to ensure they're never found.

It's been much too long since I've picked up one of Margaret Coel's Wind River mysteries, and The Spirit Woman was such a pleasure to read. Coel always seems to find a fascinating aspect of Native American or Western history to build her stories upon, and this time it's Sacajawea, the remarkable teenager who, with a baby strapped to her back and dealing with an abusive husband, guided Lewis and Clark. Proving that Sacajawea survived and died in old age on the Wind River Reservation among her people would be a coup for any historian, but it can't be just any proof. Historians want written documented evidence. Oral histories will not do. Rumors of Sacajawea's written memoirs are a magnet for both female college professors who have disappeared on the reservation.

The subject of abusive relationships is a major theme in The Spirit Woman, but for those readers who may find the subject too distressing, rest assured that Coel never resorts to any sort of graphic violence. It's what living under such circumstances can do to women that is the author's focus, and she deftly weaves this into the story.

The whodunit was easy for me to deduce, but then I don't read mysteries just to see how good I am at solving crimes. For me, characterization and setting mean even more, and Coel's series has both in abundance. There's the attraction between Father John O'Malley and attorney Vicky Holden. There's how residents of the reservation react to a historian nosing around and asking questions. But even more important, there's the fact that O'Malley's boss has decided that it's time for O'Malley to move on to a different parish. His replacement shows up almost before O'Malley has a chance to hang up the phone. John is highly respected on the reservation. How are the people going to react to his leaving? The actions of the elders should make you smile.

One of the things that kept me glued to the pages was trying to figure out how O'Malley got to stay. Let's face it... this is the sixth book in a twenty-book series, and they're all called Wind River mysteries. Father John has to stay, right? I was happy to see that my solution wasn't the right one (not that it was violent or anything, just wrong).

This is a series to savor, particularly if you love intelligent writing. The characters and the setting sing. What readers can learn about reservation life and the West is fascinating. If you haven't sampled the Wind River mysteries, I highly recommend them. Due to character development, I would suggest that you begin with the first book, The Eagle Catcher. It will be the start of a beautiful reading relationship.

The Spirit Woman by Margaret Coel