The Sinclair Betrayal by M.J. Lee 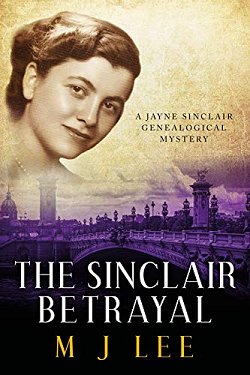 First Line: "Are you the Joes we're droppin' tonight?"

One family history that professional genealogical investigator Jayne Sinclair has never researched is her own. She's always been aware that it's full of secrets. What she didn't expect is the bombshell that her father is still alive-- and in prison for the cold-blooded killing of an old civil servant. When Jayne visits him, he tells her that he killed the wrong man-- and that he wants her to find the person who was responsible for the betrayal and death of his mother during World War II. In finally accepting her father's demand, Jayne finds herself immersed in the world of spycraft, and when she comes to the conclusion of her search, she'll never be the same again.

Due to excellent historical mysteries such as Susan Elia McNeal's Maggie Hope series, readers are becoming more familiar with the brave women who risked their lives to become very successful spies during World War II. M.J. Lee's The Sinclair Betrayal can now be added to this category of reading. Although welcome, the author's notes at the end really weren't necessary for me because I am well aware of the role of women spies during World War II. Men in power soon learned that women were better suited to many aspects of spycraft, such as coding, decoding, and handling the danger this work involved. Lee weaves the life and actions of Jayne's grandmother into a fast-paced tale that ends much sooner than I'd expected.

As the story progressed, I fell victim to some misdirection concerning Jayne, and I was very glad to learn that I was wrong. Although I did roll my eyes at such wartime slogans as "Beauty is a duty," I loved the cameo role Gavin Maxwell played in the story. It was good to be reminded of him. Lee also did a splendid job with the action scenes in the book, keeping me glued to the story and utterly invested in the welfare of the characters.

The only thing that really didn't work for me was the character of Jayne's father, Martin Sinclair. Readers see him as an infant and as an old man. There's nothing in between that helps us understand why he decided to kill an old man in revenge for a mother he thought had abandoned him. More background was needed to really make this work. However, I did enjoy The Sinclair Betrayal and look forward to the next book in the series. I haven't missed one yet, and I don't intend to start now!

The Sinclair Betrayal by M.J. Lee