Evil for Evil by Aline Templeton 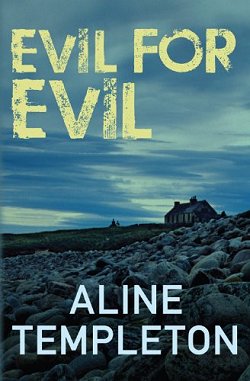 First Line: I think I'll go mad if I can't confess my guilt.

At first, it seems like a historical (although brutal) case-- a skeleton found shackled to the rocks inside a sea cave off the southwest coast of Scotland, and it should cause no undue difficulties. After all, it belongs firmly in the past. Well, it does until a modern wristwatch is found hanging on the bones of one shackled arm. With that one discovery, Detective Inspector Marjory Fleming knows this case is something else entirely.

The skeleton could tie into the strange goings-on in the nearby village of Innellan. Someone is staging a series of escalating crimes against the owner of the island on which the skeleton was found. Why is he being targeted? The villagers aren't any help. This is a small and introverted community, and no one is willing to speak out. Fleming senses there is a pattern, one that is not willing to come out into the light, but it could prove that the skeleton and the current series of crimes are connected. All she and her team have to do is find the one evil act that started it all.

I can always count on Aline Templeton to write an intelligent, compelling mystery, and her DI Marjory Fleming series has long been a favorite-- so much so that I only tend to pick one up when I need what I call a guaranteed good read. Evil for Evil is a bit slow at times, but once it builds up a good head of steam, time flies by.
The mystery itself is a strong one, as well as being surprising and quite disturbing. The village setting is atmospheric... claustrophobic... and so well drawn that most city folk could point to it as convincing proof that no one should step one single toe out in the country. When secret after secret is exposed to the light, one character describes it as "omertà Scottish style," which I think is a perfect description.
But this series isn't all about the mystery. The major reason why I keep coming back for more is due to the excellent cast. I always like watching "Big Marge" Fleming's mind work as she pieces things together. Her personal life plays a role in each book, too. In Evil for Evil, both of her children show us what parents must deal with when youngsters think with their emotions instead of their brains. Fleming's second-in-command, Tam MacNee, has to deal with a secret or two in his own life, and we get to watch newcomer Detective Constable Louise Hepburn try to apply her classroom knowledge to real-world situations in order to make a big impression on the boss.
There are always things to learn in Templeton's books, whether it's raising deer as a commercial business or finding out what a Croydon facelift is. I like learning things. I like trying to solve mysteries. I like feeling a part of the family with a multi-faceted cast of characters. There's just no way around it: I like the way Aline Templeton writes, and I'll always go back for more (especially when Big Marge Fleming is involved).
Evil for Evil by Aline Templeton
eISBN: 9780749013509
Allison & Busby © 2012
eBook, 480 pages
Police Procedural, #7 DI Marjory Fleming mystery
Rating: A-
Source: Purchased from Amazon.
by Cathy at Thursday, October 29, 2020