A Six Pack of Christie 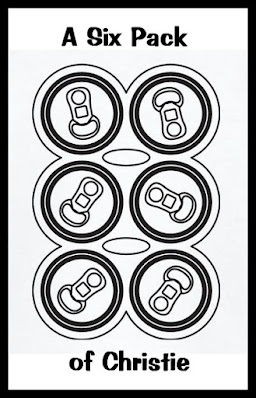 I've found that I like to dabble in Agatha Christie's short story collection from time to time, usually after I've read a spate of books with "too much middle" as Barbara Peters would say. Having experienced that, it was time to join the Queen of Crime, and I read six of her short stories, written in 1924 and 1925. The following are short "impressions" that I had about each one.

Philomel Cottage
A nice little gem from the Queen of Crime. Alix has had a drab life, but things begin to look up when she inherits a little money. Then her long-time boyfriend gets cold feet. Out of the blue, Alix falls head over heels for Gerald Martin, marries him, and buys the perfect Philomel Cottage to move into. She begins to worry when she is plagued by a recurring dream that shows her former boyfriend standing over her husband's dead body. What follows has the trademark Christie misdirection that didn't lead me very far down the garden path, but I enjoyed it all the same. (B+)

The Mystery of the Blue Jar
I loved this one! Jack Hartington is a twenty-four-year-old golf fanatic whose job interferes with lowering his handicap. He gets up very early every morning to get in a few rounds of golf, but when he starts hearing a woman's voice shouting murder and calling for help, he begins to panic. Is he going mad? No one else hears it! He definitely needs assistance. This is one of those stories that you really can't say anything about in order not to give anything away; however, it is one of the few things written by Christie that I've read so far which made me crow with delight when I turned the last page. (A+)

Jane in Search of  a Job
Jane Cleveland applies for, and gets, a job that pays a very large sum of money for a few days work as a double for a grand duchess whose life is in danger. Jane keeps telling herself that there must be a catch, but she can't afford to pass up the money. Your enjoyment of the story will hinge on how much you like the twist at the end. Me? I was moderately amused. Wasn't it P.T. Barnum who said there's a sucker born every minute? Poor Jane Cleveland... (B-)

The Mystery of the Spanish Shawl
Anthony Eastwood has the perfect title for a mystery: "The Mystery of the Second Cucumber." Problem is, he simply can't follow up his perfect title with the perfect plot. That might change now that he's recuperating from a phone call and its aftermath. Christie certainly has fun with the gullible, but I found this offering to be a bit run-of-the-mill. (C+)

The Red Signal
Here Dame Agatha gets to play with seances, unrequited love, otherworldly messages of danger, and murder. Unfortunately, I didn't find this to be one of her best. (D+)

The Witness for the Prosecution
A short story from a master that has a nice little twist at the end. Is Leonard Vole innocent or guilty of murdering a rich old woman? This story makes me think of a Shakespeare quote: "What's in a name?" Christie basically gives it away with the names she uses for the alleged murderer and his wife. (A)