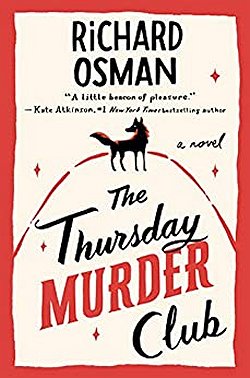 First Lines: Killing someone is easy. Hiding the body, now, that's usually the hard part. That's how you get caught.

In an upscale retirement home, four friends meet weekly in the Jigsaw Room to discuss cold cases the police couldn't solve. The rest of the community think they're discussing Japanese Opera which is why no one else has asked to join, and that suits the four just fine. They call themselves the Thursday Murder Club, and the four members-- a nurse, a spy, a psychiatrist, and a professional protester-- despite being in their seventies and eighties, are mentally as sharp as razor blades even if they do suffer an assortment of aches and pains.

When a local developer is found dead with a mysterious photograph left by the body, the Thursday Murder Club finds itself working its first live case with a detective constable who's keen to rise up the ranks. But they do have their work cut out for them, particularly as the body count rises.

I read so many mentions of The Thursday Murder Club being brilliant and hilarious that I began to wonder. For one thing, humor is probably the most subjective form of writing there is. For another, I always get nervous when the hype about any book begins to pile up. I almost changed my mind about reading it but decided to go against my better judgment.

The premise is fantastic. Four old folks who have all their marbles and are able to get out and about with no problem, who meet once a week to solve cold cases. What's not to like? The four-- a nurse, a spy, a psychiatrist, and a professional protester-- all bring their special skills and considerable intellect to the table, and they also get to help educate a detective constable who's new to the area.

There are poignant moments concerning growing old, death, and grief scattered throughout the book; this book is about more than your typical mystery. I did find myself smiling from time to time as I read some witticism, but at a quarter of the way through the book, that sort of humor seemed to vanish. I also didn't feel comfortable with a detective chief inspector working with anyone outside law enforcement so closely.  The Thursday Murder Club also suffered from one or two first-timer mistakes. First, the mystery solving seemed to vanish occasionally because the author was so enamored of his characters he forgot about the story and just wanted to spend time with them. Yes, they're interesting characters, but please don't forget why they're there in the first place. Second, I found the mystery confusing. Too many bodies piled up. Too many killers were hauled out of the shadows. Motives were flying around like bats pouring out of a cave at dusk. It takes a lot for me to become confused when reading a mystery, and I have to admit that I lost the plot a few times. I finally got to the point where I was reading just to get it over with, and that's not good.

As much as I wanted to enjoy The Thursday Murder Club, I did not, but since so much of the enjoyment hinges on humor (and as I said before, humor is so subjective), your mileage may definitely vary.